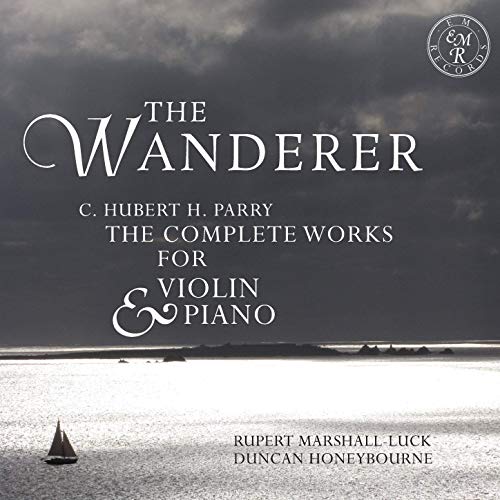 EM Records issues one of its most important releases to date, the complete works for violin and piano by Hubert Parry – the centenary of whose death occurred on October 7th last year – in what is a notable addition to the expanding discography of this still-neglected composer.

Parry’s output for violin and piano falls into two types. Firstly, shorter pieces equivalent to the French morceau or German album-blatt have been collated as the 10 Miniatures (not the composer’s title). Probably dating from his later years though never published in his lifetime, they present no great difficulties for players or listeners and were likely intended for domestic music-making. Also in this category come the Two Early Pieces, the teenage composer demonstrating an ambition that only just exceeds his technical skill at this juncture.

More advanced are the remaining short pieces, of which the Freundschaftslieder marks his early engagement with the early-Romanticism of Schubert and Mendelssohn. These four surviving (out of five) pieces unfold as a sequence of gradually intensifying expression, set in motion by the wistful poise of ‘The confidence of love’. Collated in 1894, the 12 Short Pieces were published in three sets of four – of which the exquisite ‘Idyll’ (Set 1 No 1), the eloquent ‘Romance’ (2/2) and ingratiating ‘Envoi’ (3/4) ought to find favour as frequent encore items.

The larger works are all direct and substantial engagements with the legacies of Schumann and Brahms. Bach, even, in the Partita in D minor, though these six movements only approximate to Baroque archetypes – with Parry cutting loose in a teasingly ironic Bourées fantastiques then animated Passepied en rondo. If the Sonata in D minoris a little too indebted to its models, for all its technical mastery and purposeful virtuosity, the Sonata in D ranks among his finest achievements in its formal focus and expressive impetus.

Equally engaging is the Fantasie-Sonate in B, not least for the skill with which Parry integrates its four contrasted sections into a single movement whose emotional breadth looks forward to his last orchestral works. Both published in 1907 though originating much earlier, the Suites are more relaxed in manner while being typical of their composer’s maturity; for which sample either fourth movement – the Suite in D’s tonally questing Dialogue, or the Suite in F’s harmonically subtle Retrospective with its evocative recalling of earlier ideas.

Yes, not least because of the performers – Rupert Marshall-Luck endowing violin lines with real flexibility and Duncan Honeybourne ensuring some densely chorded piano parts never feel overbearing; both players overcoming any tendency to registral or rhythmic uniformity. Not all this music was unrecorded: Erich Gruenberg tackled the Sonata in D, Fantasie-Sonate and 12 Short Pieces in 1985 (Hyperion), while Marshall-Luck set down the three sonatas only a decade ago (Radegund), but the present accounts set new standards for these works overall.

Indeed. The sound offers a realistic perspective on this difficult medium, with detailed notes about each piece (by Jeremy Dibble?). Along with the string quartets (MPR) and piano trios (Hyperion), almost all of Parry’s chamber output is now available in authoritative recordings.

You can read more about the release on the EM Recordings website, and for more information on the two performers, visit the websites of Rupert Marshall-Luck and Duncan Honeybourne respectively.