The year is 2420. London’s concert hall in the City is celebrating its 200th anniversary with a concert of music devoted to Brexit. There are songs and instrumental pieces looking to recreate the chaos of the time.

Sound fanciful? Not entirely – especially when you cast an eye over this fascinating concert from the Cardinall’s Musick and Andrew Carwood, which was all about the attempt to end the reign of King James I by Guy Fawkes and his associates in 1605.

Carwood assembled an intriguing programme of music from well-known composers of the day – Gibbons, Byrd, Tomkins and Weelkes – and those not so well known in Thomas Greaves, John Hilton, Michael East and Richard Allison. The ensemble performed groups of sacred and secular music from the time by the composers, ranging from big eight-part masterpieces by Byrd and Gibbons to miniature odes to tobacco from Michael East.

There were some unexpectedly poignant moments as the concert progressed, and funny ones too, but the group began with one of the best-known anthems from the era in Orlando Gibbons’ O clap your hands (2:20). The interweaving parts were beautifully realised under Carwood’s clear direction. 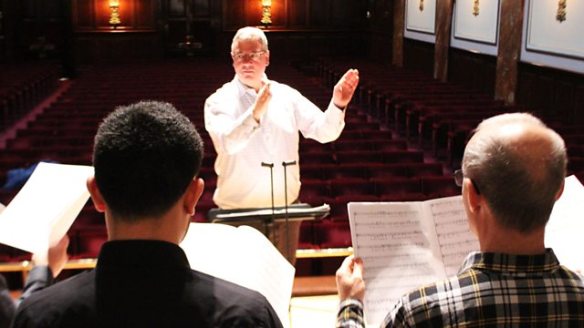 The conductor (above) then gave the first of several informative and entertaining guides to both the historical period and the repertoire. Thomas Greaves’ five-part welcome song in honour of James, England receive the rightful king (9:55) led to Thomas Tomkins’ thoughtful O God, the proud are risen against me (11:59). Written in eight parts, this was a barely concealed railing against the leaders of the plot to overthrow the king and government, with some spicy dissonances clearly inflected by the sopranos.
John Hilton’s As there be three blue beans (15:39) was unexpectedly mischievous, a three-part round brilliantly sung by altos Patrick Craig and David Gould, and tenor Benjamin Durrant. It finished by marking the existence of three universities in England – Cambridge, Oxford and James.

Also in this group was William Byrd’s majestic The eagle’s force (17:44), which benefited from the clarity of the altos’ singing, and Michael East’s ode O metaphysical tobacco (20:07). King James I hated tobacco – and eventually had its ambassador Sir Walter Raleigh executed to appease Spain – but many in society loved this new discovery (as they do 415 years on!) There was no evidence of gravelly voices in this performance!

A piece of really impressive heft followed, Byrd’s anthem Deus venerunt gentes (24:03), described by Carwood as ‘symphonic’. A setting of Psalm 78, it is said to be the psalm martyrs would say on their approach to death, to receive forgiveness – and was used by the composer here as a lament for his fellow composer Thomas Campion. By nature it is a serious piece, and its stately progression was ideally paced by the group here, offering time for reflection during its 13 minutes. The lower registers of Byrd’s writing, especially around the 30:25 mark, were immaculately observed and set the downbeat mood, which followed the text impeccably.

The next selection of music looked at England in the aftermath of the Guy Fawkes plot. After another helpful introduction from Carwood we heard a prayer for the posterity of the king, Richard Allison’s O Lord bow down, a reverential number (39:37), followed by Thomas Tomkins’ request to the Lord for protection, The hills stand about Jerusalem (43:43), where the two sopranos and tenor dovetailed exquisitely. Following the same theme, Thomas Weelkes’ sobering O Lord God Almighty had explicit mentions for the royal family and their security (46:08), once again showing how little has changed in the preceding 400 years.

The Cardinall’s Musick are the following singers, conducted by Andrew Carwood:

This concert contained the following music (with timings on the BBC Sounds broadcast in brackets):

Unfortunately some of the music heard in this concert is not available on Spotify, but the below playlist contains the music that could be found in available versions:

The Cardinall’s Musick have made a number of highly acclaimed recordings of the music of William Byrd. Two are available to hear on Spotify, recorded in the 1990s for the ASV label and featuring the eight part works heard in the concert. They are the Cantiones Sacrae…

…and the Propers for the Nativity…

On a completely different tip is this playlist of music suitable for fireworks! It includes works by Stravinsky and Debussy, but begins with the perennial Handel favourite Music for the Royal Fireworks, conducted by the recently departed Raymond Leppard: