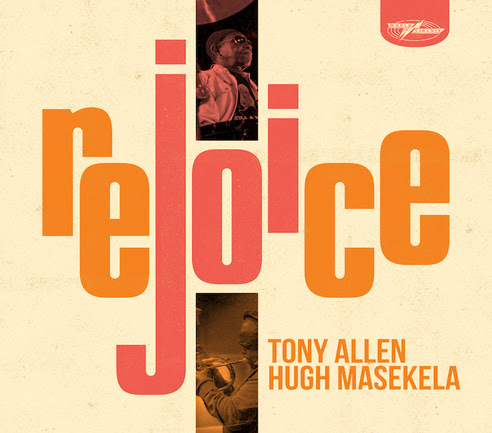 A joyous one indeed, for this is a collaboration between two of the very finest jazz musicians of the latter half of the 20th century. Nigerian drummer Tony Allen and South African trumpeter Hugh Masekela met through links to Fela Kuti in the 1970s. Thanks to their close association, the two had long since talked about makng an album together.

Finally in 2010 the opportunity arose through a helpful collision of touring, and recordings were made – but were unfinished when Masekela died in 2018. Allen and producer Nick Gold, who recorded the original sessions, finished the original tapes last summer in the same studio, adding the bass, keyboard and vibes with the help of Tom Herbert, Joe Armon-Jones, Mutale Chashi and saxophonist Steve Williamson.

The best thing about Rejoice is that it immediately transports its listeners to happier times. Allen has described it as ‘a kind of South African-Nigerian swing-jazz stew’, and that gives an indication of the ease with which the two rub their different styles into the mix.

After an introductory chant it’s not long before we hear the two protagonists as instrumentalists, Allen’s propulsive break beat and Masekela’s bright treble an ideal match on Robbers, Thugs and Muggers (O’Galajani).

Agbada Bougou is more staccato in its delivery, the two trading musical thoughts with a nice lilt to the duet of Masekela’s trumpet and Williamson’s saxophone. Coconut Jam trips along with Allen’s bustling snare, while the vocals come to the fore on Never in a chant of ‘Lagos Never gonna be the same without Fela’. The lyrics of Rejoice are split between Zulu, Yoruba and English, another gesture celebrating diversity and unity.

Slow Bones is a real highlight, with intricate but propulsive drumming from Allen creating a funky undercarriage to Masekela’s inflections, while Obama Shuffle Strut Blues gets the trumpet and saxophone up close again, brilliantly shadowing each other over Allen’s expansive beats.

Yes. Although Masekela wasn’t present for the final editing processes it is difficult to imagine how they could have been more effectively wrought, the feeling of spontaneity between the two master instrumentalists running through the album.

Yes, and especially so given the climate in which we find ourselves. Rejoice!, as its title implies, is a celebration of the freedom we have when making music together, and the creative fires that music making can ignite. We can take this inspiration on board and put it to good use in the future.

You can buy Rejoice from the Norman Records website