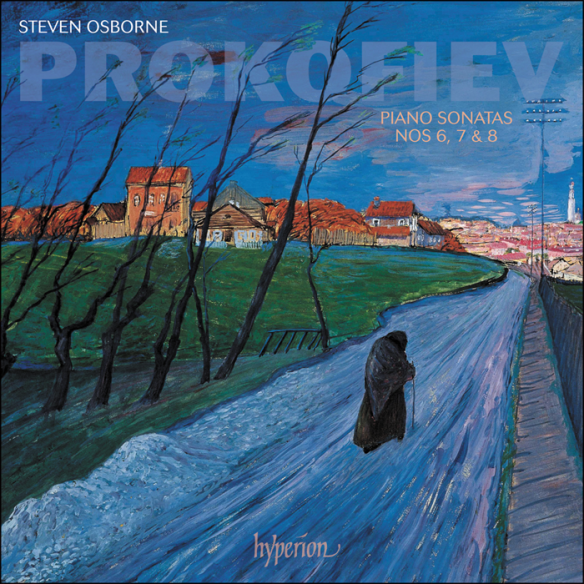 Steven Osborne has been an advocate of Sergei Prokofiev’s piano music for a number of years now, receiving rave reviews for his performances of the sonatas in particular. This release has therefore been keenly awaited for some time, as Osborne takes on the composer’s so-called ‘war trilogy’.

Prokofiev himself did not label the pieces in this way, but he did work on them simultaneously between 1939 and 1944, as the full horror of the Second World War became apparent. While the composer’s public facing side was preoccupied with writing music of which Stalin could not disapprove, the Piano Sonatas are more private works, the composer left with his real thoughts alone at the piano.

Prokofiev himself gave the premiere of the Sixth Sonata in 1940, after which the following two works were left in the considerable hands of Sviatoslav Richter (1943) and Emil Gilels (1944). Each premiere was given in Moscow.

While the Piano Sonata no.7 is found in concert relatively often on account of its virtuosity and dramatic impact, the two around it are lesser spotted companions. They are however two of the composer’s most substantial and meaningful works. The Seventh itself is restless, like a cat on a hot tin roof in the fast outer movements, but pausing for deep and soulful reflection in the second.

The Piano Sonata no.6 has a great depth of feeling. Its first movement presents a caustic but memorable main theme, while the second, a scherzo, is equal parts dry humour and studied, chromatic reflection. A waltz follows, its long and delicate melodies reminding us of Prokofiev as a composer for the stage, before the finale brings forward an extraordinary theme, quick and quiet initially but building to a close of formidable power.

Meanwhile the Piano Sonata no.8, while retaining the key of the seventh, is a very different beast. Prokofiev’s most substantial work for solo piano, it has much longer musical phrases and appears to portray the composer’s innermost thoughts.

Wholeheartedly. Osborne has the measure of Prokofiev’s music, producing a devastating combination of virtuosity and deep-set feeling.

In the Piano Sonata no.6 there is no doubt of the force of the composer’s emotion, his despair and anger at the unfolding conflict tampered by music of a much softer touch. The abrasive start, major and minor chords clashing, tells you all you need to hear, yet perhaps even more striking are the quieter passages, which Osborne plays with pointed delicacy, the ticking sound in the first movement drawing the listener in, and the ripples of lyricism in the third presenting a compelling scene. Yet there is great resolve here, which comes to the fore in the finale, Osborne driving forward with the main theme but lowering the temperature considerably with a haunting reappearance of the main tune from the first movement.

The Seventh Sonata is terrific, played right on the edge of the cliff but again with keen dramatic instinct. The first movement dances around its central key of B flat major with edgy impatience. Osborne’s dynamic range is hugely impressive, ranging from intimate asides to the clanging percussive passages Prokofiev loves to use. Turning inwards for the slow movement, he goes deep into some of Prokofiev’s most moving music for piano, the lilting contour of the left hand at the start building to a powerful apex in the middle. The third movement Toccata is gone in a flash, driving incessantly forward, grimly determined as though looking to escape its pursuers but trampling on them by the end!

Despite these impressive achievements Osborne’s Eighth Sonata is the crowning glory of this set. He allows the ruminative first movement plenty of time to air its thoughts, Prokofiev in contemplative mood for an unusually concentrated stretch, before the more abrasive thoughts of the previous sonatas bubble to the surface.

The second movement offers a chance for repose, its relatively gentle demeanour helped by a triple time lilt that Osborne paces attractively. The finale brings renewed energy, a valedictory air around both its first theme and the commanding central section, which the pianist takes by the scruff of the neck, leading to a barnstorming closing page.

Hyperion’s sound is ideal, Osborne placed in excellent digital perspective but with plenty of room for Prokofiev’s very biggest sound. There is a huge dynamic range in this music and thankfully we get the best of all worlds.

Absolutely. These sonatas have had some fine recordings over the years, and Osborne’s join those right at the top of the digital list. An outstanding achievement from all involved.