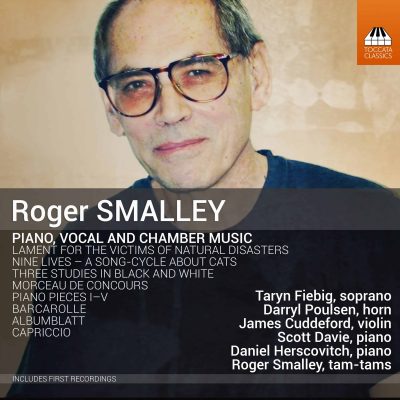 Toccata Classics releases this welcome overview of music by Roger Smalley (1943-2015), whose extensive output followed an eventful and unpredictable trajectory from unabashed modernism to post-classicism demonstrably informed and enhanced by a performer’s insight.

As varied as this selection might suggest. Earliest here is Piano Pieces I-V, tersely distinctive miniatures whose conspectus of radical tendencies from Schoenberg to Stockhausen is allied to a pianism at once resourceful and pragmatic. An aesthetic heightened in Capriccio no.1, whose often confrontational interplay between violin and piano owes much to Schoenberg’s late Phantasy while not precluding a more personal approach such as Smalley’s subsequent involvement with Stockhausen transmuted into a more progressive but less emotive manner.

By the time of Barcarolle, Smalley had moved away from modernist traits towards an idiom permeated by while never beholden to the Romantic era. Chopin’s famous example may not be evident here, but the ominous undulation of Fauré’s earlier such pieces is unmistakable; as is Liszt in the scintillating dexterity of Morceau de Concours, a test-piece to reckon with not just in terms of its technique. Most impressive, however, is Three Studies in Black and White, a trilogy likely inspired by Alkan’s Op. 76 Études – with the opening Gamelan a visceral yet ultimately eloquent exploration for left hand; by contrast, Moto perpetuo is an edgy and often volatile workout for right hand, then Dialogue reunites both hands in music at once resolute and consoling. Few, if any, piano pieces of such substance have been composed this century.

Which is not to underestimate the effectiveness of Nine Lives. Subtitled A Song-Cycle about Cats, these settings of feline evocation range as widely as that of the authors featured. Of the three extended items – that by Oscar Wilde is stealthy and secretive, that by Christina Rosetti a memorial of deadpan insouciance, while that by Oliver Herford is a luminous and affecting envoi. Framing the programme are a brief Albumblatt later subsumed into the Piano Trio, and Lament for the Victims of Natural Disasters where horn eulogizes against resonant tam-tams.

Yes. Smalley’s academic career at University of Western Australia at Perth connected him to many significant musicians, several of whom are present here. Taryn Fiebig brings a wealth of nuance to the songs and is ably accompanied by Scott Davis, while James Cuddeford and Darryl Poulsen make salient contributions. Greatest credit, though, to Daniel Herscovitch for piano playing as not only makes light of the considerable technical demands but conveys the unity within diversity of Smalley’s musical language throughout four decades of evolution.

Indeed. The Smalley discography is not inconsiderable, and readers should investigate such major works as Accord (Continuum) or Pulses (NMC); while Poles Apart (NMC) focusses on more recent pieces.

A plea, too, for the reissue of the Symphony and First Piano Concerto (Vox Australis), two of his defining works. That said, this latest release makes as inclusive an overview as has been issued. The sound is unexceptionally fine, and booklet notes unfailingly insightful, but for the track-listing the Barcarolle and Morceau have added 10 minutes each.