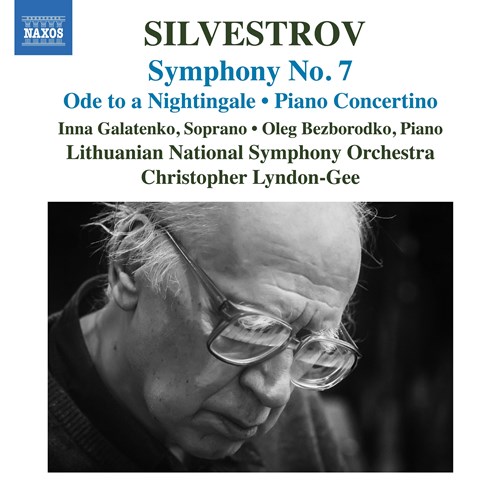 Naxos makes a notable addition to the Valentin Silvestrov discography with this release of mainly recent works, mostly in first recordings, and all idiomatically realized by Lithuanian artists under the direction of conductor (and sometime composer) Christopher Lyndon-Gee.

Much the earliest piece, Ode to a Nightingale includes all the verses of Keats’s poem. A series of motifs constantly recurs and recombines such that this text is not so much set as projected via a rhetorical while flexible vocal line, heard against an instrumental texture dominated by a carillon that evokes the eponymous bird. Previously encountered in a chamber version, this is the first recording of the recently premiered orchestral original, and if larger forces extend rather than intensify its expressive scope, this is hardly to the detriment of the music overall.

Two decades on, and Cantata no.4 is an assembly of verse by Ukrainian poets (including the national author Taras Schevchenko), set in a manner that evidently recalls the salon intimacy of mid-19th century Russian songwriters. Most appealing is its Pastorale second movement, which duly re-emerges in expanded form as the corresponding movement in the Concertino written soon afterwards. Nominally more abstract, this latter piece charts a wider emotional terrain – the wryly ingratiating Pastorale framed by a Preliudium whose majesty rapidly dissipates, then a Serenade of wistful poise; none of these movements quite anticipates the Postliudium which brings about a closure of decidedly ominous ambivalence – a reminder that the seeming repose of Silvestrov’s later music is permeated by an introspective anxiety.

This is no less audible in Moments of Poetry and Music, a brief yet telling juxtaposition of verse by Paul Celan – to piano accompaniment – with a longer paraphrase where piano and orchestra open-out those salient motifs to a degree the more affecting for its understatement.

Which just leaves the Seventh Symphony – at barely 18 minutes, the shortest of Silvestrov’s maturity while eschewing both the underlying integration of the Fifth and plangent contrasts of the Sixth. Nor is it any less characteristic, unfolding as an unbroken span where episodes of relative tension and release interleave on the way to a coda of rapt evanescence. A pivotal cadenza from piano (rendered by Marija Grikevičiūté) is but the most significant appearance by an instrument whose concertante function tangibly enhances the speculative aura overall.

Yes, providing one remembers the music from this composer’s maturity is less about ongoing evolution than incremental variation (the Eighth Symphony rather seems to indicate a stylistic shift in its priorities). Such pieces are best listened to individually, though the programme as assembled is persuasive in its follow-through; with Inna Galatenko eloquent during her vocal contributions and Oleg Bezborodko a pianist of no little finesse. Lyndon-Gee secures playing from the Lithuanian National Symphony as to indicate an orchestra punching above its status.

Indeed, and at its modest price this is an ideal introduction to the composer for those yet to be acquainted with his music. Conductor and orchestra will hopefully tackle more Silvestrov, not least the three symphonies (the Ninth pointedly entitled Ode to Joy) he has gone on to write.

You can listen to clips from the recording and purchase, either in physical or digital form, at the Naxos website