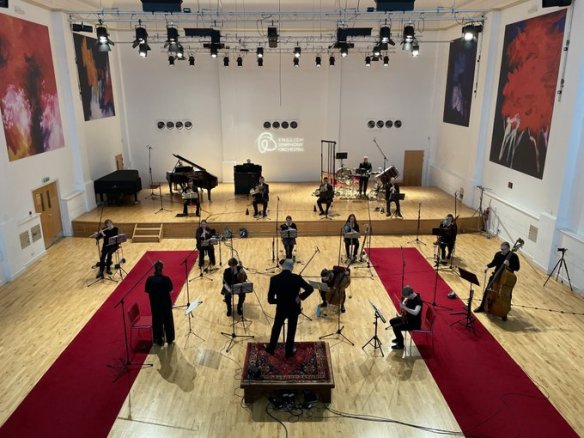 The chamber reductions of orchestral works, as pioneered by the Society for Private Musical Performances founded by Schoenberg after the First World War, has gained renewed impetus these past 15 months given the unfeasibility of full-scale performances. Few can have been as ambitious as Mahler’s Ninth Symphony – arranged by pianist and conductor Klaus Simon for an ensemble of single strings and woodwind (with doublings), two horns, trumpet, percussion (one player), piano and harmonium; its textural and motivic content thereby remaining intact.

This is evident in the opening Andante, arguably Mahler’s most perfectly realized symphonic movement, whose formal trajectory of interlocking arcs is made explicit so that its long-term expressive intensification and release become no less tangible. To this end, the roles of piano and harmonium are much more than the mere filling-out of texture – respectively articulating and reinforcing the harmonic profile through to a coda which more than usually clinches the overall tonal journey with a serenity the more poignant for its remaining, as yet, unfulfilled.

The ensuing Ländler was no less lucid in terms of its unfolding, Kenneth Woods resisting any temptation to play up the emotional contrasts across a movement whose deceptive blitheness of spirit is only gradually undermined (and a quality this music shares, doubtless unbeknown to the younger composer, with Ravel’s La valse). Equally significant is the way that Simon’s arrangement discreetly emphasizes disparities of timbre and texture, on the way to a closing section where the music only too audibly fragments into a bemused parody of how it began.

More questionable is the Rondo-Burleske – Woods’s underlying tempo for the outer sections, while enabling the music’s contrapuntal intricacy to emerge unimpeded, feeling too dogged to convey its frequently assaultive manner to the degree that the composer surely intended. This is less of an issue in a trio section whose aching regret was potently conveyed, with the stealthy regaining of tension no less in evidence. Animated and accurate, this final section again lacked that seething energy which propels the movement towards its anguished close.

No such questions affect the final Adagio – only equivocally conclusive now that the Tenth Symphony has all but been accepted into the Mahler canon, yet remaining a test of all-round cohesion such as this account rendered with unwavering conviction. Having thus gauged the balance between its alternate paragraphs, Woods assuredly controlled the winding down of tension towards a coda of inward rapture despite its sparseness of gesture – while affording the speculative dialogue between solo strings the necessary temporal and emotional space.

It hardly needs to be said that the playing of this 15-strong ensemble drawn from the English Symphony Orchestra was consistently attuned to the spirit of this music – as, too, is Simon’s methodical and apposite arrangement. Whether such reductions can continue to be relevant in the (presumed) aftermath of the pandemic, it would be a pity were these not to enjoy revival in their own right: revival, moreover, out of aesthetic rather than just didactic considerations, as this impressively conceived and executed rendition demonstrated to often moving effect.