Carl Craig’s Detroit Love mix series moves onto a fourth instalment under the watchful eye of Mirko Loko, who Craig recruited for the Detroit Electronic Music Festival back in 2001. With such a longstanding attachment to the city and its techno heritage, the Swiss DJ is a natural choice and takes the chance to say thank you to Detroit and its cultural legacy. He does so in the form of a 22-track mix including homegrown talent but also casting an eye further afield to show off the influence of the city.

This is a really fine set, mixed with impressive fluidity by Mirko Loko. From the start he creates a good deal of space, Fred P’s Vision In Osaka setting the scene beautifully before Loko’s own excellent Detroit Love Mix of It’s Like, with persuasive vocals from Ursula Rucker. As the mix proceeds Loko moves between quite minimal tracks and bigger, expansive moments like Chaos In The CBD’s Comfort Zone, or the blissful Aos Si of Takuya Yamashita.

However the real high point comes with Derrick May’s appearance on Loko’s Mentors Heritage, a mix made especially for the compilation. The booming voice and percussion are an ideal match, especially when segueing into the bare bones of the piano in Laurent Garnier’s mix of Gilb’R’s Pressure.

From then the mix rolls on, taking in the propulsive Madness of Temo Howard before an excellent finish from Mirko Loko and Stacey Pullen with Tronic Illusion – another exclusive mix – and Lady B’s Cruising Around Motor City.

It does indeed. Well paced, structured and full of subtly euphoric moments uniting past and present in an effortless blend.

Yes – a very strong addition to what is proving to be an extremely collectable series.

Wolfgang Voigt has every right to be proud as one of the flagship series of the Kompakt label, Pop Ambient, reaches its 20th edition. Cologne’s finest label refuses to rest on its laurels, mind, delivering a set of old and new music, best enjoyed horizontally.

Blissful. Kompakt have not been doing this sort of compilation for 20 years without reward – they know the quick routes to peace of body and mind, as made possible in music.

There is a pleasing mix of familiar and relatively new names here. In the former camp sit Thomas Fehlmann and the bubbling textures of Liebesperlen, Raumschmiere‘s brooding Notre-Dame and two Andrew Thomas contributions, Song 9 and Sleep Fall.

Into the latter group come the easy paced guitar instrumental from Urquell, who also contributes Alles Bleibt Anders. On a similar plain is Gen Pop‘s Iron Woman and early Kompakt contributor Klimek‘s All The Little Horses, though the same producer’s Requiem For A Butterfly offers darker, widescreen strings. For even deeper ambience Yui Onodera offers the incredibly calming Cromo 4, while Joachim Spieth is even more immersive on Meteor.

Yes. The ebb and flow of the tracks is ideally judged, and the high ratio of exclusives and new tracks make the 20th edition of this series as collectable as ever.

Without hesitation. Pop Ambient has a reassuringly regular place in the calendar of down tempo music, and this is it’s best collection for some time. On a personal level, with the world experiencing such stress and change at present, this is just the sort of music required to counteract it!

Stream and Buy (from November 29) 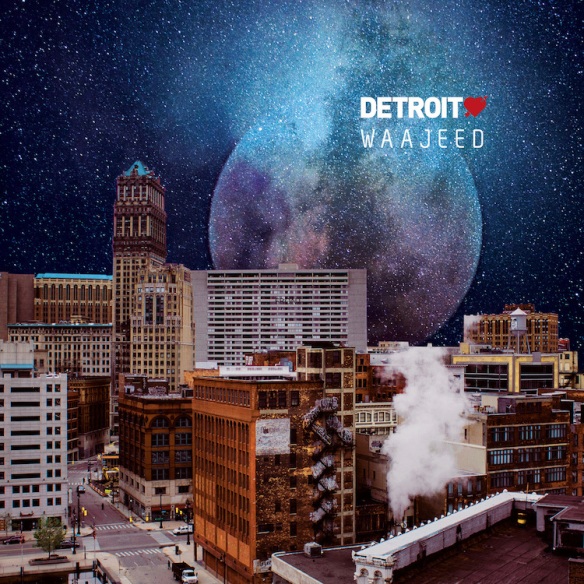 His is a very personal take on the city’s music, having grown up with its soul and hip hop, not to mention the rich house and techno tradition to which he has more recently moved. He describes his contribution as a selection of tracks ‘from a small group of my favourite contemporaries from Detroit and abroad’.

Pretty bouncy – at least from the start. Wajeed fires the starting gun with a couple of mid-tempo tracks with a spring in their step, 14KT’s We Out Chea and Blackloops’ Higher.

Wajeed’s references to hip hop and jazz are subtle but lasting, making themselves known in Tall Black Guy’s Coffee Room before the mix heads for deeper territory with Patrice Scott and the cool vibes of The Detroit Upright.

With the mix settling into its groove quickly this is an ideal way into the evening, whether staying in or going out. If it’s the latter you will definitely benefit from Rocco Rodamaal’s Someday, a gospel-tinged number reworked by Brian Tappert rework, and from the rolling drums of Ninetoes’ Stand Up.

The sound perspective widens for D-Love Music’s Celestrial, a warm-hearted addition with its big brush strokes of spacey synths, which leads into Damon Bell’s Mermaid Blues, with persuasive vocal contribution from Camille Syfia. Roddy Rod’s Overbite has a strong bit of piano work and Matthew Law’s Minimariddim a good instinctive feel, stripping the textures back.

The bounce is back for Joss Moog’s persuasive 196, before the drums roll more for Teflon Dons’ Gonna Tell Me. LADYMONIX gets some really good warehouse-style percussion for WhoRU, leading to the chopped up vocal of Harry Romero’s Revolution.
DJ Rimarkable’s I’m In Trouble has an excellent vocal, one of the stand-outs of the mix, and this paves the way for a closing duo of Lux’s groove The Set Up and Preslav & C. Scott with warm grooves to finish on Achey Breaky.

Yes. Although Detroit Love is likely to be labelled as a techno series Wajeed proves there is going to be much more to it than that, with a commendable willingness to bring in the city’s other important forms of music commendable and definitely suited for the long term.

Yes. It will be interesting to see where Detroit Love goes next, for although we’ve had three volumes there are so many more musical back streets to navigate. Even if it heads for techno again there is a huge pool of more than able DJs from which to choose!

Stream and Buy (from November 15)

The collaborative series between Carl Craig’s Planet E label and !K7 moves onto its second instalment, bringing the main man to the fore for a 90 minute mix honouring the techno traditions of his home city. He follows Stacey Pullen’s excellent series opener from last year.

Craig sets the bar high with the orchestral sounds of Kevin Saunderson and Virus J, their ‘World Of Deep’ gathering the troops with a big old blast of chords. From there a quick tempo is established and the good tunes flow naturally, with Detroit techno royalty in evidence. ‘Rosalie’ from Green Velvet makes an early impact, the bass creeping upwards against the acidic top line.

Octave One’s ‘Rock My Soul’ hits a sweet groove, as does the probing bass line of Wajeed’s ‘Power In Numbers’. The gospel flavours of ‘Calling Out Your Name’ follow, Sophie Lloyd backed by Robert Hood under his Floorplan alias – a typically big, smiley number from him.

Craig continues at quite a nippy tempo through the sparkly edged ‘Do It All Night’ of DJ Minx, blending perfectly in with Claude VonStroke’s ‘My Love Check’ before it. More highlights include the driven dub version of Mr. G’s ‘Lights’, Mirko Loko and Stacey Pullen achieving a big block breakdown with ‘Formulaic Mode’, and Craig later moving on to the booming voice of the ‘Boss’ man, courtesy of Brain.

Towards the end we hear a cracking rarity, the electro old school sounds of Rhythim Is Rhythim’s ‘It Is What It Is’, before another vintage revival in Ectomorph’s ‘Satori’. This ends the dance action, Craig signing off with the gritty garage blues sound of The Dirtbombs’ ‘Alleys Of Your Mind’.

Yes. This is one of Craig’s more flowing mixes, and while that means it doesn’t necessarily push the genre boundaries as willingly as he has in the past, it does deliver a rollicking good time from Michigan.

Definitely. Detroit Love is shaping up to be a collectible series, and there are still many producers capable of adding their own homage to America’s first city of techno.