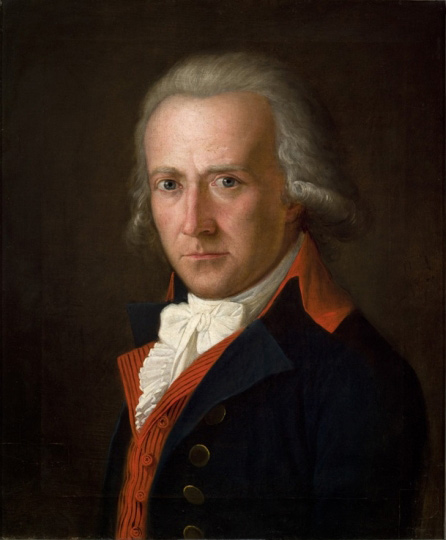 This is our second encounter with a text Beethoven was to set four, maybe even five times in the course of his life – and it is his second setting in a year, following the version tagged as WoO 121. The poet Friedrich von Matthisson has also featured previously in his output – through the cornerstone song Adelaide – but now the Opferlied (‘Song of Sacrifice’) appears in a setting for lower voice and piano. As the Unheard Beethoven site points out, it would be finally completed to the composer’s satisfaction when properly published as Op.121b in 1824.

The text stayed with him from now until the end of his life – and again we refer to Unheard Beethoven for noting that it runs hand-in-hand with Ode an die Freude, the Ode to Joy, as a text the composer was mildly obsessed with.

This setting of the Opferlied pairs singer and pianist closely – the right hand of the keyboard shadowing the melody almost throughout. The tempo is slow but the song seems to end a bit too soon, perhaps reflecting its unpublished status.

As with the first version there are strong hymn-like moments in Beethoven’s writing, the singer transported by his text.

Seemingly the only available recording of this version of Opferlied, the performance has a nice poise in the hands of Paul Armin Edelmann and Bernadette Bartos.

Also written in 1796 Boieldieu –  Duet no.2 in B flat major for harp and piano

Next up Sonata for piano and cello in F major Op.5/1

This substantial setting of a text by Friedrich von Matthisson proved Beethoven’s most adventurous song to date. Commentators see Adelaide (pronounced A-del-eeder) as something of a watershed in his output, both in the prominence of the piano and its unusual, ‘through-composed’ structure.

By ‘through composed’ we mean a song that does not repeat itself in a recognisable way, though the four verses do each end with the beloved’s name. In this way the structure operates in the way a Baroque cantata might. Perhaps Beethoven was mindful of Handel’s vocal works when using this form.

Jan Swafford writes, ‘Beethoven obviously loved the sentimental verses of poet Friedrich von Matthisson. He labored on the setting of Adelaide for more than two years. Matthisson received the dedication and, in 1800, a copy of the song with an admiring and pleading letter from Beethoven: My most ardent wish will be fulfilled if my musical setting of your heavenly Adelaide does not altogether displease you and if, as a result, you should be prompted to write another similar poem…I will then strive to compose a setting of your beautiful poetry’.

Unfortunately the song confused some of his audience, including the poet himself, who found the song insensitive. Julian Haylock, writing in the Hyperion booklet for Stephan Ganz and Roger Vignoles’ recording, says ‘the solo-sonata style Beethoven adopts for the third verse in particular was perceived as overbalancing the text’, and that ‘the dramatic outpourings of the same verse, with its sudden changes of dynamic…were considered more suited to the opera house than the drawing room.’

Swafford speculates that ‘Adelaide might, in fact, have been written as part of Beethoven’s courting of Magdalena Willmann, a beautiful and talented contralto whom he had known in the Bonn Kapelle and who had come to Vienna to sing.’

The exact dates for the completion of the song are unknown, but it was published in 1797.

Something feels different and new about this song, right from the expansive piano introduction, which gives notice of a much bigger structure.

The song itself is a beauty, the most immediate we have yet heard from Beethoven as a songwriter. The dappled piano part flows in thrall to the vocal line, which is by turns lovelorn and optimistic.

For the third verse Beethoven shifts to a new key and outlook, reflecting the evening breezes through the piano and a slight shiver to the vocal line, which takes on a yearning quality as Adelaide’s name reappears.

The last of the four verses makes a decisive shift to the major key, a positive future on the cards as the singer declares Einst, o Wunder! entblüht auf meinem Grabe Eine Blume der Asche meines Herzens (One day, O miracle! there shall bloom on my grave A flower from the ashes of my heart).

Gerold Huber’s introduction for Christian Gerhaher is of the sort that makes the listener stop and pay attention; it sets the scene of the ‘magical sweet light that shimmers through the swaying boughs’ perfectly. Gerhaher himself is ideal. Similar praise can be directed to Stephan Ganz and Roger Vignoles, beautifully balanced and poised.

There is a recording from tenor Martyn Hill and Christopher Hogwood on the fortepiano that is unfortunately only available as part of a massive L’Oiseau-Lyre box set; happily the fortepiano of Melvyn Tan can be heard prompting Anne Sofie von Otter’s relatively urgent account.

Dietrich Fischer-Dieskau is an ardent singer of this particular song, as is Fritz Wunderlich, moving up a few tones to sing in the tenor range.

The following playlist brings together six different versions of Adelaide, from Fritz Wunderlich to Matthias Goerne:

Beethoven set the text to Freidrich von Matthisson‘s Opferlied on no fewer than four occasions, and there are signs that he became somewhat obsessed with its text. The ChoralWiki entry for the piece – which was eventually set in a choral version – details how Beethoven included the statement Das Schöne zu dem Guten! (“The beautiful to the good”), in his late manuscripts.

The entry goes on to describe how ‘Matthisson’s text depicts a young man in a oak grove offering a sacrifice to Zeus. The man asks Zeus to be the protector of liberty, and to give him, both now and in his old age, beautiful things, because he is good’.

This first version remained unpublished – but by the time of the fourth version Beethoven was writing for a four-part chorus and orchestra, indicating perhaps how the importance of the text had amplified.

The Opferlied is an invitation to the baritone to sound forth, Beethoven assigning his singer a strong melody which is doubled by the piano almost throughout.

The song is a passionate one, with long notes for the singer that make it sound rather like a hymn – and the the piano responds in reverential kind.

Next up Trio for 2 oboes and cor anglais in C major Op.87

A note on this song from the Beethoven-Haus museum in Bonn tells us that Friedrich Matthisson first published this poem in 1785 in Hamburg, under the title An Serena. In 1787 however the poem appeared unchanged in the first edition of Matthisson’s poems, under the new title An Laura.

Beethoven’s setting followed soon after – maybe as little as three years – and only the first and third verses were written out under the music in the autograph score. This is taken as an indication that the first part was to be repeated for the second verse.

The message from this song is positive to begin with, joyful even – and the soprano line carries nicely above flowing piano accompaniment. Beethoven gets quite chromatic with the melody towards the end of the first two verses, before a change of mood in the central section heightens the drama.

After that brief aside we return to the music of the opening, if not the mood – a scene at the grave casting a shadow over proceedings. It is as though Schubert and Mahler are waiting in the wings at this point.

Pamela Coburn brings a relatively rich soprano line to this song. Peter Schreier is a fair bit quicker, pushing the melody along.