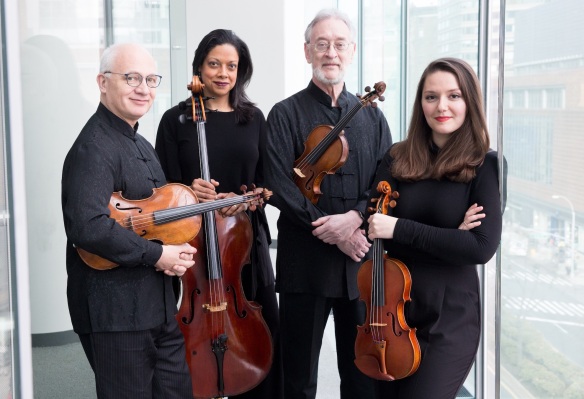 The Juilliard String Quartet are a very different proposition now to when they were formed in 1946. In the analogue recording years string quartets were almost wholly formed of white male players, and it has been very satisfying to see the trend broadening in the last couple of decades. The Juilliards themselves appear to have hit on a perfect blend of youth and experience, with first violinist Areta Zhulla joining their ranks for the 2018/19 season. On this evidence it has given them a real shot in the arm, helped by their willingness to bring with them a new work from Lembit Beecher. This gave their Wigmore Hall lunchtime concert a symmetrical feel, for Beecher’s new work for string quartet draws from Europe and more specifically Estonia – while Dvořák’s most celebrated ‘American’ String Quartet finds him writing in America but using a melodic style common to both the USA and the Czech Republic.

Beecher first, and the European premiere of One Hundred Years Grows Shorter Over Time. The intriguing title takes as its lead an Estonian melody, a waltz written by Beecher’s grand uncle Ilmar Kiiss, now in his mid-90s. This meaningful piece of music puts its head above the parapet in the first two of the three movements making up the quartet, before fully revealing itself in the third. The movements themselves represent different generations and their telling of the same story, which becomes less detailed as one generation passes to the next. As a result the first contains more definitive incidents, the second is more shadowy and less focussed in detail but poignant in mood, and the third, while recalling the attractive waltz in charming detail, is slower in its movements.

In concert this is a very effective piece of music not just to listen to but to watch. The busy conversations of the first movement (2:25 on the broadcast link) feel as though Beecher had set words to music, removing them just before performance, and making the first violin the loudest voice. This reaches a natural apex through Zhulla’s faultless higher register playing (from 5:10), before subsiding in volume and intensity, to some unusually emotional figures around 7:15 that simply dies on the string.

The second movement (from 11:51) uses subtle but effective techniques such as harmonics to create the shadowy effects, while from 14:51 a sudden injection of pace and volume gets an excitable conversation going again. The tender waltz theme would seem to be from 16:58 on the viola, before the violin ascends to the heights.

The third movement (from 18:39) has mottled textures and a slight lethargy, as though the memories are more difficult to place. Again the violin’s voice is loudest, but the shady movements of the others and the closing tremolos (from around 22:25) give a fragile and autumnal air to proceedings. All these elements were superbly marshalled in performance by the Juilliard Quartet, and made you want to hear more of Beecher’s music.

The Juilliard’s performance of the Dvořák, meanwhile, was a joy. This much-played work – one of the most popular string quartets there is, together with the Debussy and the Ravel works – rediscovers its freshness here. This is thanks in part to Zhulla’s clear affection for the piece. After Roger Tapping’s viola gives a silvery exposition of the first tune, she leads with a beautiful tone once again (26:57), enjoying the outdoor nature of the pentatonic melodies – which, as Gerald Larner’s programme note helpfully point out, seem to be equal parts Bohemia and Iowa. (The pentatonic scale, as its name implies, is made up of just five notes – in this case F (the home key), G, A, C and D). Although Dvořák was on a lengthy vacation when he wrote the string quartet, and was doubtless influenced by the melodies he heard in America, there is never the feeling that his Czech heritage is far away. The sentimental second theme (28:21) bears this out.

Meanwhile Zhulla and cellist Astrid Schween capture the bittersweet main melody of the slow movement to perfection (37:18) and (38:03), the rocking motion of its accompaniment acting as a lullaby. The ensemble enjoys the scampering figures of the Scherzo (44:47) before a brief Trio section (46:58) brings forward what the composer believed to be the song of the scarlet tanager in the first violin. The Scherzo resumes shortly after at 47:44.

The finale (48:52) is bold and positive in this performance, the quartet enjoying the abundance of tunes available to them – most of them taking in the pentatonic scale once again, with a rustic, outdoor feel.

With the bonus of a Haydn encore in the same key and mood (the Minuet from his Op.77/2 quartet at 56:06), this was the ideal January concert, an inspiring and optimistic pairing of works that celebrate the diversity of culture but also look at the heritage of each and bring them together. A lesson for the future in this country, perhaps?

Lembit Beecher’s One Hundred Years Grows Shorter Over Time is not currently available online; however you can listen below to his previous work for string quartet, Small Infinities:

The Juilliard String Quartet recorded Dvořák’s American string quartet all the way back in 1968 – yet that version does not appear to have yet reached Spotify. The below link is to a recent disc from the Škampa Quartet, coupling the quartet with the String Quintet in E flat major published immediately after. It is similarly free-spirited:

Lembit Beecher’s composer website contains detailed information on his output, with a healthy dose of videos and audio tracks. Meanwhile you can read more about the Juilliard String Quartet at their website. For a biography of Antonin Dvořák, this dedicated site to the composer is recommended.