You can listen to this Prom on BBC Sounds here

The Proms has witnessed some memorable (and innovative) Berlioz performances – with this evening’s account of Benevento Cellini, itself the culmination of Sir John Eliot Gardiner‘s Berlioz project leading up to the 150th anniversary of the composer’s death, an undoubted highpoint.

Not a little of its success was the effectiveness of this ‘staged concert performance’ – directed by Noa Naamat so as to make resourceful use of the Royal Albert Hall platform (who would have thought that singers hiding behind – antiphonally divided – second violins made so deft a theatrical conceit?), with unfussy costumes from Sarah Denise Cordery in keeping with the late-Renaissance setting and lighting from Rick Fisher as vividly expanded on the latter-day Proms procedure of illuminating the stage area. A presentation serving the opera admirably.

At least as significant was Gardiner’s pragmatism over just how much of the opera to include. Even at its Paris premiere in 1838, what was heard of Benvenuto Cellini was already distinct from what Berlioz had written; an issue further complicated by versions presented at Weimar during 1852-6. Taking the Urtext published in the New Berlioz Edition, Gardiner has arrived at a compromise which encompasses all the music one would reasonably hope to hear while vindicating this opera as an overall dramatic concept. Recklessly ambitious in its technical demands as it may have been, Cellini was always practicable as a dramatic undertaking and – akin to Prokofiev’s War and Peace a century later – giving a convincing shape to this excess of material is at least half the battle in ensuring its theatrical as well as its musical success.

Not the least of those technical demands is on the singers, and this cast did not disappoint. As Cellini, Michael Spyres (above) evinced all the necessary panache without buckling under some stentorian vocal requirements. He was ideally complemented by Sophia Burgos as a pert yet never too coquettish Teresa; her naivety thrown into relief by the machinations of her suitor Fieramosca, given with suitably hollow bravado by Lionel Lhote, and cynicism of her father Balducci – tellingly rendered by Maurizio Muraro. Adele Charvet made for an appealing and sympathetic Ascanio, with Alex Ashworth exuding appropriate pomposity as Pompeo. Peter Davoren’s cameo as the unctuous Innkeeper was matched by that of Tareq Nazmi as the self-aggrandizing Pope. The Monteverdi Choir brought off its crucial contributions with aplomb. 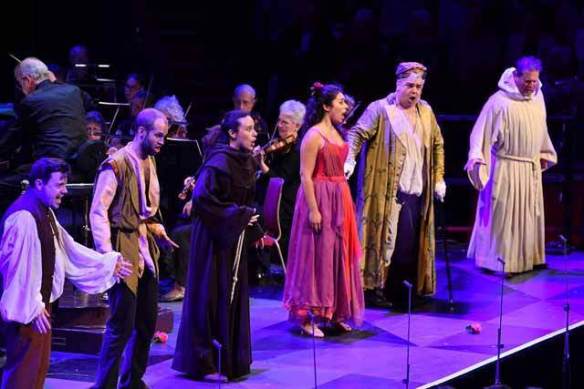 Inevitably it is the orchestra which so often steals the limelight in a work by Berlioz, and the Orchestre Revolutionnaire et Romantique accordingly rose to the challenge. Of course, any performance of this music on ‘authentic’ instruments must contend with his assertions that the development of instrument-making and instrumental practice (notably within Germanic territories) was a necessary one. That said, he may have been reconciled to those limitations had his work been rendered with such timbral brilliance and intonational accuracy as here.

In building an ensemble of such consistency Gardiner takes especial credit, the more so as his performance demonstrably channelled its authentic credentials towards the spontaneous and creative reassessment of a masterpiece now receiving its due – even if many decades too late.