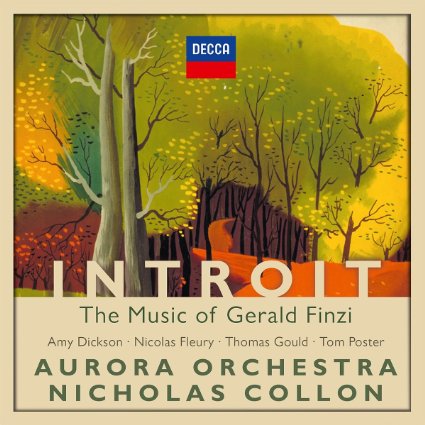 What did he write? Finzi’s output is slender but there are reasons behind that – not least the fact he lost his father, teacher and three brothers all at the age of eighteen. This compilation reinforces his reputation as a miniaturist, capable of producing some exquisite pieces of around five or ten minutes in length. This is rather unfair, as his vocal writing and works for soloist and orchestra reveal a composer of much greater substance.

Dies natalis and Intimations of Immortality are the vocal works of choice, while there are concertos for cello and clarinet that are worth exploring. On a smaller scale Finzi loved setting the words of Thomas Hardy, with A Young Man’s Exhortation and Earth and Air and Rain two fine song cycles for voice and piano.

What are the works on this new recording? This is an anthology of Finzi’s shorter works from the Aurora Orchestra and Nicholas Collon. It concentrates on the string orchestra, his principal means of expression. A Severn Rhapsody, Prelude and Romance are all originals, as is the Eclogue for piano and orchestra, while Mike Sheppard, Paul Mealor and Patrick Hawes contribute specially commissioned arrangements that give extra prominence to saxophone (Amy Dickson) and horn (Nicolas Fleury).

The disc, headed by the beautiful artwork How bravely autumn paints upon the sky by Edward McKnight, celebrates the composer’s 60th anniversary in collaboration with The Finzi Trust.

What is the music like? Finzi’s music is like a late summer evening – often beautiful to the ear, but with creeping shadows in the background that make their presence felt in a subtle but meaningful way. These shadows are found especially in the yearning Romance and Prelude, and the consoling but darkly shaded Eclogue.

There is a lot of slow music here, perhaps reflecting the fact that Finzi’s shorter works are often at a slower tempo. As a result they do not give us every aspect of the composer’s output. It does however show how his writing for string orchestra is almost without equal in 20th century English music – fans include Neil Hannon of the Divine Comedy – and it also shows how, in works like the Romance and the livelier Rollicum-Rorum especially, he could pen a memorable tune.

The Introit for violin and orchestra also has a good tune, and is sweetly performed by soloist Thomas Gould, while Rollicum-Rorum is sensitively played by Dickson, who shows impressive agility too.

What’s the verdict? This is a compilation that has clearly been put together with love, care and attention, but there is not as much variety as there could be. Finzi comes across here as relatively one-dimensional, and well-played though the performances are, it feels like an opportunity only partially taken.

Give this a try if you like… the lighter side of Elgar, Vaughan Williams and Delius

Watch the album trailer below:

You can also listen to an excerpt from the disc on Spotify: 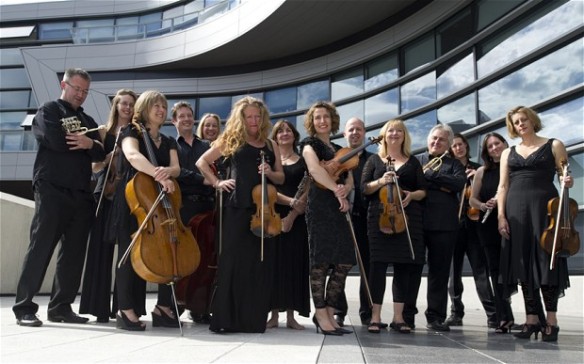 If chamber music is not your forte, then I cannot imagine a better way into it than by the Britten Sinfonia’s ‘At Lunch’ concert series, held in London, Cambridge and Norwich.

Each program explores works written for a particular instrumental combination, but always includes a world premiere from a living composer. The informal atmosphere is both performer and audience friendly, and as a diversion from work or a pause in the middle of the day, the experience is ideal.

This second concert of the 2015 season chose to look at the piano trio, a misleading label since the standard combination of instruments for the trio is piano, violin and cello. Yet, as the program observed, the form is less often used by contemporary composers, and has a heritage of works running from Haydn in the mid-18th century through to 20th century composers such as Shostakovich, who featured here.

What the Britten Sinfonia did really well was to present possible solutions to the form, which here included adding percussion. To begin we heard Lou Harrison’s Varied Trio, for violin, piano and percussion. Harrison, an American composer who lived from 1917-2003, took as his inspiration the music of a number of different countries including China and Indonesia, and his original approach here included a set of rice bowls played with chopsticks. The resultant sounds were often soothing and rather wonderful, drifting as though on the breeze from percussionist Owen Gunnell, but with pianist Huw Watkins also reaching around inside the instrument to produce some unusual sounds. Completing the trio was violinist Thomas Gould, whose sweetly toned Elegy formed the third of the Varied Trio’s five movements and made it the emotional centre.

The new piece was from 22-year old composer Joey Roukens, who described his Lost in a surreal trip as ‘a psychedelic, kaleidoscopic 12-minute piece’. It was vividly coloured and brilliantly realised by the players, adding cellist Caroline Dearnley to their number. Early on the music cast spells of dappled light through harmonics on the strings and intriguing percussion sounds, but then a more mechanical energy took hold as though we were being transported by train to a place without a firm surface. With bags of reverberation and some enchanting sounds from the marimbas, this piece was consistently inventive and will be well worth hearing.

From the conventional piano trio legacy came one of its finest works in the 20th century, the Piano Trio no.2 by Shostakovich. This concentrated wartime work from 1944 is packed full of anguish, marking the death of the composer’s close friend Ivan Sollertinsky but also expressing outright anger at conflict and war. Gould, Dearnley and Watkins had no need for percussion here, not with the rhythmic profile Shostakovich establishes, but theirs was a keenly felt performance that left the listener in no doubt of the composer’s feelings and concerns.

A Spotify playlist containing the Varied trio and the Shostakovich Piano Trio no.2 can be accessed here: