Semyon Bychkov turns 70 today…and in recognition of one of our finest living conductors, here is a link to watch this most erudite musician conducting the WDR-Sinfonieorchester Köln in William Walton’s First Symphony:

Here too is a playlist gathering together some of his finest recordings, from the early days with Philips to his most recent release, an account of Mahler’s Symphony no.5 with the Czech Philharmonic Orchestra for Pentatone. Along the way we hear excerpts or complete works by Tchaikovsky, Prokofiev, Mendelssohn, Dutilleux and Rachmaninoff. It is a wonderful listen, I’m sure you’ll agree!

Our brief look at the music used in the Coronation of Queen Elizabeth II continues with three lesser-known composers whose music was used at either end of the ceremony in 1953.

Receiving its first performance was the Processional by the new incumbent of the position Master of the Queen’s Music, Sir Arthur Bliss. Ideally timed for the ceremony (with a procession that was in total more than six miles!) its orchestral opening builds steadily until the grand entry of the organ half way through. After its central section the piece builds to a rousing conclusion, led by organ, brass and drums:

Also heard before the service was the Epic March by John Ireland. This was effectively a piece of wartime propaganda, written in 1942 to boost the spirits of a flagging nation. When asked for the piece, Ireland wrote to Sir Adrian Boult, “What I have in mind is stern and purposeful rather than jolly and complacent”. The piece was first heard on the opening night of the 1942 season of Promenade concerts, and its stoic, noble tones were wholly suitable as part of the music before the Coronation service:

As the royal party and guests departed they heard the familiar strains of Elgar’s Pomp and Circumstance Marches, nos. 1 & 4 respectively. Sandwiched between the two pieces was a new work by Sir Arnold Bax. The Coronation March has an unmistakably regal feel, some choice moments for the trombones, and a suitably royal chorale to finish:

As all UK-based readers of Arcana will surely know, it is a long weekend of celebrations for the Platinum Jubilee of Queen Elizabeth II. On these pages I thought it would be a good opportunity to look at some of the music used in the service of her Coronation, which took place a year to the day after her accession to the throne.

We begin with three pieces from Sir William Walton which have become some of his best-loved works. The first, Crown Imperial, is almost instantly recognisable, a piece that brings great pomp and circumstance to a ceremony without ever spilling over into over-patriotic bluster – very English, in short. Crown Imperial was commissioned by the BBC for the coronation of George VI in 1937, and was also used in the ceremony for Elizabeth II in 1953

At the close of the ceremony the congregation heard a new piece, Orb and Sceptre, for which Walton was paid £50 by the Arts Council in October 1952. The composer was candid about the new piece. “The Orb and Sceptre I wrote for her is goodish – not as good as Crown Imperial, but I did my best.” He was being modest, for there are still some good tunes contained within, a hint of Elgar in the regal second theme, and colourful writing for brass and percussion.

In November 1952 the organist of Westminster Abbey, William Mackie, persuaded Walton to write a Te Deum for the forthcoming service. With the chance to use the Queen’s Trumpeters, the composer agreed, writing a piece fit for the occasion, using the space of Westminster Abbey to perfection with bold orchestral writing, a spicy organ part and celebratory choral writing. Lady Susanna Walton, the composer’s wife, recalls, “The actual coronation was extraordinary…the Queen’s Trumpeters, standing on the clerestory with long silver trumpets and banners, made a dramatic impact”. 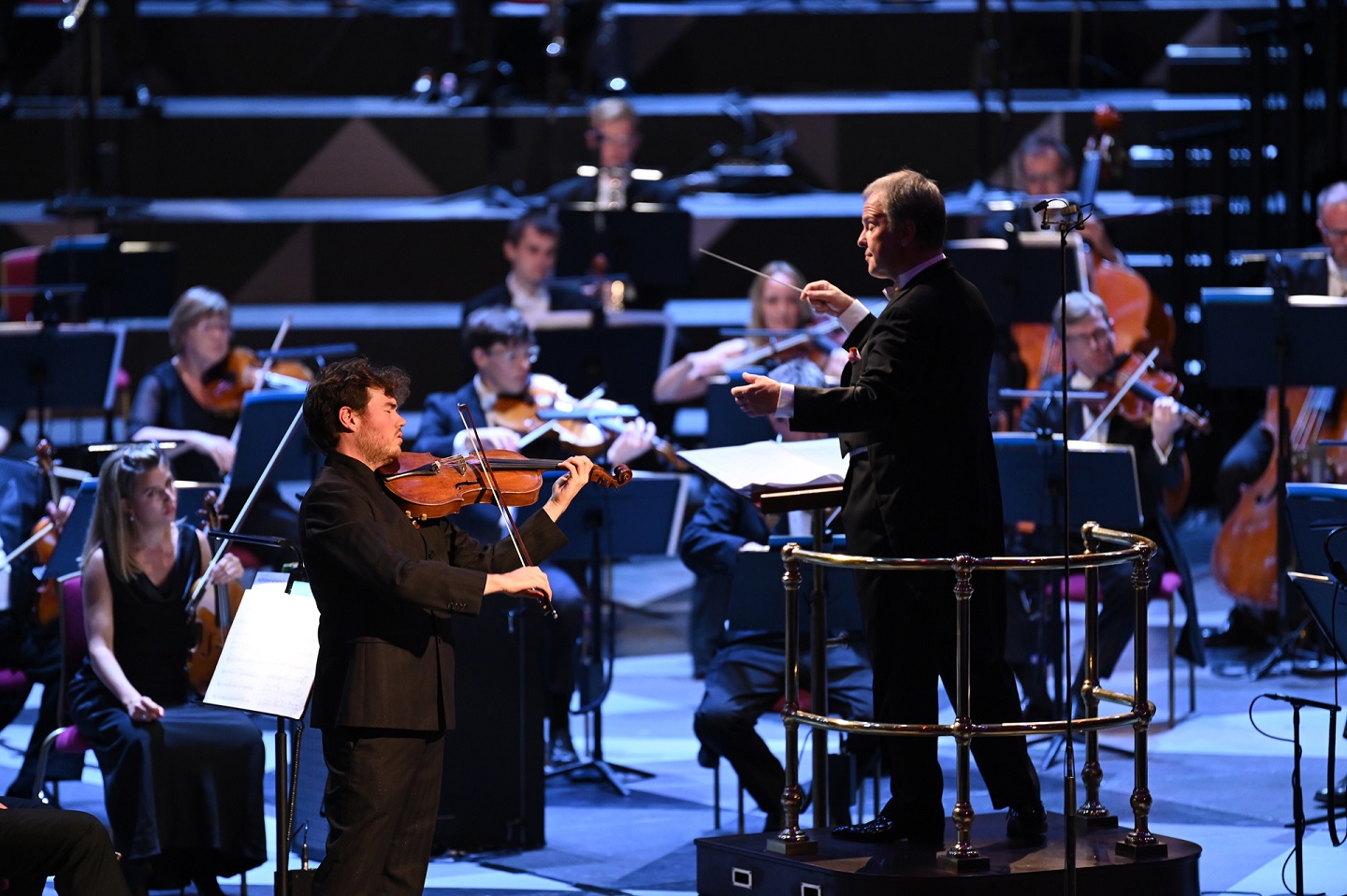 Sakari Oramo tonight returned to the Proms for the first of two concerts as chief conductor of the BBC Symphony Orchestra, in a typically wide-ranging programme of British music as commenced with the overture La cabaret that John Foulds penned as incidental music before it became an autonomous item. For all its vaudevillian aura and unabashed razzmatazz, this ‘Overture to a French Comedy’ throws in numerous stylistic curveballs to point up its intent such as Oramo, given an advocacy of this composer stretching back over two decades, underlined with relish.

Although Walton’s music of the 1920s evinces a not dissimilar extroversion, a very different aspect of the composer is evident in his Viola Concerto – heard this evening in its revision for reduced forces but a notable role for harp. It also brought a Proms debut for Timothy Ridout, his burnished tone and unfaltering intonation much in evidence in the first movement with its smouldering pathos and brief if volatile flights of fancy (qualities which suggest Prokofiev’s First Violin Concerto as the most likely model) that were carefully integrated into the whole.

The central Vivo was the undoubted highlight of this performance – Ridout’s passagework unflagging even at the tempo indicated by the revision, not least in those syncopated asides that amply delineate the spirit of the times. By contrast, the finale began reticently then only gradually intensified towards a climactic tutti that brought out the best in the BBCSO; after which, Ridout’s take on the coda made it seem almost parenthetical in its overt rumination, while rounding off the whole work with appropriate inevitability and unforced eloquence.

After the interval, a first hearing in the UK for Where Icebergs Dance Away – the most recent orchestral piece by Charlotte Bray, whose Cello Concerto was a highlight of the 2016 season. Inspired by the icy landscapes encountered on a visit to Greenland, this brief yet atmospheric piece – a faster central episode placing the relative stasis on either side into meaningful relief – suggested qualities of greater organic growth and emotional intensification which deserved to be expounded on a larger scale, while never feeling underdeveloped in the present context.

It may have taken six decades to appear at the Proms, but Sir Malcolm Arnold‘s Fifth Symphony – if not the finest of his cycle, is surely its most representative by dint of those confrontational extremes which, in the opening Tempestuoso alone, pit acerbic irony against expressive angst as threaten to overwhelm the movement’s formal logic. That it failed to do so was testament to Oramo’s acuity in keeping this music’s seeming excesses within relative proportion – not least in the violent irresolution of the closing pages, with their stark withdrawal into silence.

Featuring one of Arnold’s most potent melodies, the Andante brought a rapt response by the BBCSO strings and if Oramo drew less than the ultimate terror from the central climax, the transition to the pensive second theme then return to the initial melody were breathtakingly achieved. Neither was there any lack of malevolence or sardonic humour in the scherzo – its energy carrying over into a finale that was paced superbly to a climactic restatement of the Andante‘s melody and its collapse into nothingness. A fitting close to an impressive reading.

Vladimir Jurowski this evening concluded his highly impressive 14-year tenure as Principal Conductor of the London Philharmonic Orchestra with a thoughtfully conceived and well-proportioned programme; one which typically played to this orchestra’s strengths as much as to his own.

Although it can seem something of an ‘also-ran’ in the context of his compositions from the period, Stravinsky’s Jeu de cartes lacks for little in terms of that rhythmic effervescence as was engagingly evident in this performance – Jurowski pointing up the humour and even occasional glimmers of pathos that inform what can easily seem music written on autopilot. The LPO responded with a trenchancy and alacrity as held good throughout this ‘ballet in three deals’, the tonal punning of whose culmination at least ensures a humorous outcome.

Walton’s Cello Concerto used to be regarded with even less favour than Stravinsky’s ballet, but this piece (written by its composer at much the same age) is now seen as more than the enervated recycling of past success. Steven Isserlis (above) has long advocated its cause, and there was little doubting his commitment in a reading of perceptiveness and finesse. At times his spare and even fragile tone tended to recede into even so restrained and transparent as this, Jurowski mindful to rein in those brief climactic moments of the outer movements, but the artful interplay of the central scherzo did not lack for incisiveness or irony. Nor, after the second of the solo variations in the finale, was there any absence of rapture as soloist and orchestra are reconciled in drawing the music through to its close of fatalistic acceptance.

After the interval, a novelty in an arrangement by composer-conductor Friedrich Goldmann (1941-2009) of the 14 canons latterly identified from Bach’s printed copy of his Goldberg Variations. Arranged for a Stravinskian post-classical orchestra, these intricate and arcane studies in canonic dexterity emerge from gentle aridity to luminous elaboration with spare, methodical elegance such as intrigues and disengages in equal measure. Hardly something one expected to hear at such an occasion or this venue, though worth hearing all the same.

In its reiterating the values of Enlightenment humanism, moreover, this prepared admirably for Hindemith’s Symphony ‘Mathis der Maler’; premiered on the cusp of Germany’s descent into barbarous self-destruction, and a plea from the committed – however reluctantly – artist for a rational response as might be worth emulating today. The alternately radiant and tensile unfolding of Concert of Angels was perfectly judged, as too the plaintive resignation of the brief if affecting Entombment. The Temptation of St Anthony then made for an elaborate finale, but Jurowski paced it superbly – the plangent central interlude thrown into relief by the impassioned episodes on either side, then its anguished introduction by an apotheosis whose ultimate wresting of triumph from adversity remains thrilling as a statement of artistic intent.

A performance to savour, then, not least as John Gilhooly presented Jurowski with the Gold Medal of the Royal Philharmonic Society in recognition of services to music – an accolade with an illustrious history, which can rarely have been more deserved than on this occasion.