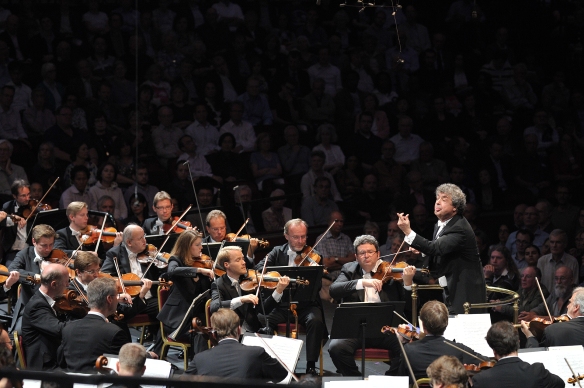 ‘Some music has to wait before it finds its place in the sun.’

This standout quote comes from an interview in the Proms program with conductor Semyon Bychkov, who conducted the Vienna Philharmonic Orchestra in this concert of two late Romantic symphonies. The work to which he referred was not Brahms’ Third Symphony, which received an occasionally beautiful but ultimately rather lethargic performance in the first half, but the Second Symphony of Franz Schmidt, completed in 1913.

Schmidt’s music has only visited the Royal Albert Hall in full on two previous occasions. The Fourth Symphony, which experienced a revival when Frans Welser-Möst and the London Philharmonic Orchestra won a Gramophone Award for a recording of it in 1996, was heard at the festival in 1998. The relative success of this was followed by the massive sacred piece Das Buch mit Sieben Siegeln (The Book of the Seven Seals), which followed a similar path, recorded by Welser-Most in 1996 and performed by the same conductor in 2000.

Schmidt was a wholly suitable choice of composer for the Vienna Philharmonic, who have been revisiting important works in their history this year. Unlike the Brahms third they did not give the premiere of the Schmidt, but the connections with the composer are close. He became a member of the orchestra in 1896, where he played as a cellist – though he did not get on with Gustav Mahler, conductor at the time. Bychkov has championed the Second Symphony with other orchestras, so it made sense to finally bring it to the Vienna Philharmonic. From what I could tell this was their first season performing this or any of his symphonies. So what of the piece itself?

Written on a large scale, the Second clocks in at around 50 minutes. It is in three movements, the large second movement dominating at around half the length of the piece – and it was the centrepiece here. A colourful and richly layered set of variations on a theme, it delights in exploring a number of completely contrasting moods, drawing unusual textures from the orchestra that reveal Schmidt the organ composer. A few of the variations sound uncannily like right hand keyboard figures played at speed, with amazing clarity of colour.

There were clear influences from Bach, Beethoven, Mahler, Richard Strauss and Bruckner – yet the music was nothing like a copy of any of these composers. Instead Schmidt managed to stamp his own personality on the piece, shying away from obvious statements so that the mood was at times strangely elusive, on occasion reluctant to commit to emotion with obvious meaning.

It had operatic qualities, for sure, which could be felt in the ebb and flow of the drama and in the swell of the melodies – but the unusually luminous colours dominated, Schmidt using the orchestra in his own individual way. Here he wrote especially taxing parts for violins and violas, but the crowning glory was the massive brass chorale that appeared towards the end and was resolved without fuss.

Only the Proms could have presented this combination of orchestra and music, and should be congratulated for doing so. It was expertly performed and well received, and should go a long way to giving Schmidt’s music the chance of a revival it deserves. It will be interesting to come back in five years and see if anyone else has taken up the baton from Bychkov.

A playlist combining the Second and Fourth Symphonies can be heard here:

Meanwhile for the massive Das Buch mit Sieben Siegeln (The Book of the Seven Seals), in a recent recording made for Chandos under conductor Kristjan Jarvi, click on the link below:

This is the last Under the Surface feature of this year’s Proms. There will be more explorations of rare repertoire on Arcana in the coming months, both through recordings and concerts. Stay tuned!