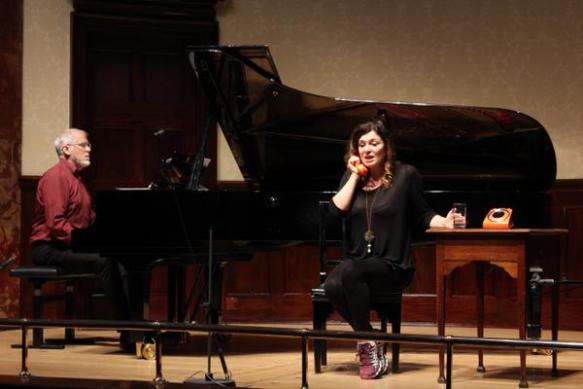 on the iPlayer until 13 October

In case you cannot hear the broadcast, here is a Spotify playlist of the music in this concert – none of which Anna Caterina Antonacci or Donald Sulzen have yet recorded. Poulenc wrote these pieces either for voice and piano or voice and orchestra, and the playlist opts for the latter as Felicity Lott is the vocalist.

A voice and piano version can be heard from Denia Mazzola Gavazzeni and Eric Hull here: 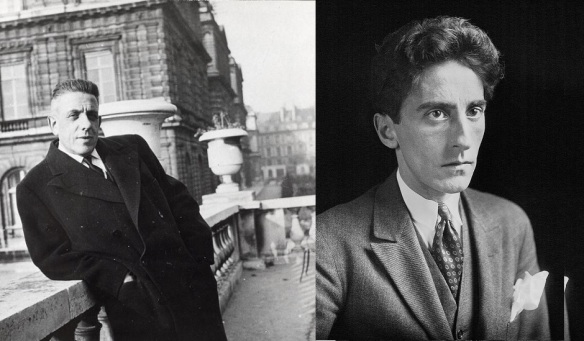 A brave program to start the Wigmore Hall’s new lunchtime season! Francis Poulenc (left picture above) is a composer loved for his humour and witty tunes, but these two melodramas bring out his darker side. The humour remains at a much-reduced level, as does the melodic interest which tends to be assigned more to the piano.

La dame de Monte Carlo, written to words by Jean Cocteau (right picture above), describes a suicidal woman who goes to the principality for a bout of gambling before ending her life in the Mediterranean.

La voix humaine is a much more substantial piece, written three years earlier. It was found by Poulenc and Cocteau to mimic their own lives, and Poulenc identified himself with the subject, a woman whose lover of five years is about to get married. We don’t meet the lover but the study of the woman, carried out in the form of a telephone call, builds a picture of both parties from her perspective. The woman is starting to come to terms with her lot, and has herself taken an overdose the previous night. Over the course of nearly 40 minutes Poulenc and Cocteau explore a wide range of feelings from earlier in the relationship, but above all they bring out the insecurities and terror of starting again alone without a loved one.

Their innovative script – telephones not being that widespread in 1958 – is well ahead of its time, still very relevant to the present day, and Poulenc portrays the phone ringing with uncanny accuracy through the piano. Not only that, he uses the piano to set the mood, describing not just the woman’s movements but also anticipating what is said on the other end of the line. It is an often uncomfortable but mesmerising experience.

Anna Caterina Antonacci and Donald Sulzen were superb in this performance of both works, allowing a more light-hearted approach in La dame de Monte Carlo but getting right to the heart of the matter in La voix humaine, which turned into a harrowing experience as Antonacci walked restlessly up and down the stage.

Her text was especially clear, which proved to be a real asset when following the quick moving thoughts of the woman. Donald Sulzen was similarly profound in his communication of the piano part, even taking some elements from Poulenc’s orchestral arrangement to bolster his depiction of the unravelling emotions on stage. It all made for a powerful and unsettling concert – a bold season opener!

Words are here, part of a massive Hyperion set of the complete Poulenc songs. The words can be found on Page 126

Described by the composer as ‘the lamentable story of an old, abandoned, miserable floozy who, instead of suicide, tries her luck at Monte Carlo and finally throws herself into the Mediterranean’.

2:16 – a gentle if quite sorrowful introduction from the piano, followed by the soprano with a downbeat assessment of life. Here Poulenc is describing sadness, and the different verses follow with descriptions of pride (from 4:24), lyricism (5:28), violence (6:37) and finally sarcasm (7:18). The sorrowful tale ends with the subject throwing herself into the sea – described impishly by the piano with a chord that sounds like a small ‘plop’!

Antonacci played the role with a telephone either in her hand or on the table next to her, walking distractedly around the stage as the part demanded.

12:48 – the piano sets the rather fraught scene as the subject waits for the phone to ring – which it finally does (13:45). However it’s a wrong number, so the tension grows further until…

14:55 – the phone rings for a third time, and finally to her relief it is the woman’s lover. The conversation can begin. Initially she is strong but by 18:00 the façade is beginning to crack, as the husk in Antonacci’s voice shows. The speech is more faltering.

21:30 – the woman begins to panic, and then, as the two are momentarily disconnected at 22:15, her distress gets ever closer to the surface. Her lover does not sound the same – and then comes the confession, from 24:30, that ‘J’évite de me regarder’ (‘I no longer look at my face’)

26:06 – the quality of the line deteriorates, the piano becomes discordant and the operator has to intervene. The tension goes up another couple of notches!

29:37 – now the woman begins her confession, that she is close to ruin and took an overdose the previous night. She becomes agitated and starts to move around the stage, which you can hear as the perspective of the singer changes. The piano matches her mood.

32:22 – the music now reflects the sadness and emptiness of the subject, as the woman details the details of her overdose the previous night. Whenever the phone comes close to dying she becomes nearly hysterical.

35:43 – a tender moment as the woman recalls time with her lover, but the reverie is broken as the piano plays jazzy music, which she can hear over the phone.

38:39 – ‘I love to hear you speaking’, the woman confesses – and then she looks back on the five years they have spent together. Again this bout of nostalgia is rudely interrupted by an interloper on the line (39:31). Gradually the woman begins to imagine them making up – before around 42:00 declaring that ‘a telephone is cold, what we had is lost for ever’.

43:52 – the two become disconnected, and the woman feverishly wishes for her subject to call back. Her very life seems to depend on it.

44:51 – now the woman becomes gradually more resigned to the lovers’ fate, and the drama ends with a final declaration of love at 48:40. Here the waltz theme Poulenc has worked into the piano part returns in a poignant gesture, before a final piano chord.

Normally Arcana would recommend a piece or two by the same composer, but in this case a strong recommendation is put forward for a live recording of Antonacci and Sulzen at the Wigmore Hall a few years back, performing a recital including French and Italian songs by Hahn, Tosti, Cilea and Respighi: