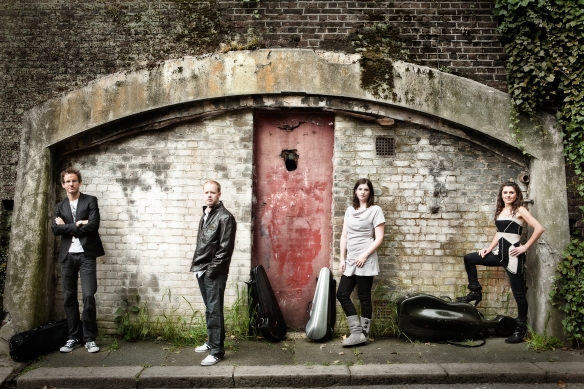 A fascinating concert presenting Dvořák’s American String Quartet in a very different context to the one we normally see. The Carducci Quartet approached this lovely, tuneful work from the direction of Philip Glass and Arvo Pärt, and their different takes on minimalism. By doing this we got to compare the way each composer works and how they write for string quartet, and then had a chance to enjoy the way Dvořák repeats a lot of the themes in his own piece.

Philip Glass first, and his String Quartet no.3, written as part of his music for Paul Schrader’s film about Yukio Mishima. Some of the soundtrack has music for full orchestra but the string quartet are used for childhood flashbacks, and form an intriguing and character-building whole.

Glass took the five such movements and made them into a string quartet, in music of unexpected tenderness and sensitivity. That said, the first movement, 1957: Award montage, feels like a smaller string orchestra given the full bodied scoring (from 1:28 on the broadcast) November 25: Ichigaya (5:59) is a slow, reflective passage that sounds uncannily like the slow movement of the Dvořák to come. Grandmother and Kimitake (from 7:39) is a forceful, sharply defined piece of writing, brilliantly played here, while 1962: Body building (10:58) starts slower, using the mid to lower ranges of the quartet, before picking up again. Blood oath (12:49) has furtive arpeggios that gather power, while Mishima – Closing (16:13) is warmly reflective of what has gone before.

Estonian composer Arvo Pärt has become one of the most popular living composers. His musical style draws from his experience of chant music and bells, and is referred to as ‘tintinnabuli’, drawing from the Latin for bell. One of the first works to use this approach was Summa, written for string orchestra but equally at home in its string quartet setting (from 22:00). Its five minutes pass in blissful simplicity.

And so to the American Quartet (28:04), the perfect piece for a summer’s day. The Carducci immediately find the warmth of Dvořák’s tunes, which may have been written in America but are full of longing for his home country of Czechoslovakia. Most of them use a ‘pentatonic’ scale, which is a scale with five notes rather than the octave’s eight (explained here

The first movement, marked Allegro ma non troppo (meaning fast but not too fast, from 28:04) is full of the fresh outdoors and has some very hummable tunes. Contrasting the mood a little is the Lento slow movement (from 35:23), which gives more prominence to the cello for its gorgeous slow theme. It is sensitively played here by Emma Denton, especially when it returns at 41:13.

The third movement, marked Molto vivace (lively) is quite mischievous (from 42:47) and a little slower than quartets tend to take it in this performance. The sunny outlook remains, the quartet really enjoying themselves – though there are shadows in the central section. The finale (from 47:02) is marked Vivace ma non troppo (lively but not too fast), and zips along with yet more melodic inspiration. The Carduccis give this an ideal performance, thoroughly enjoying the lively and rustic melodies.

The works in this concert are on Spotify and can be heard below:

If you want to hear more Glass then the Carducci have recorded his other quartets, and they are softly hypnotic:

Meanwhile a very appealing two-disc collection by the Chilingirian Quartet puts Arvo Pärt’s Summa in context with works by his contemporary John Tavener: