O/Modernt (above) / Hugo Ticciati (below)

The Time Unwrapped series at Kings Place has dealt out a number of very interesting concerts. This program from the young Swedish-based but European-sourced O/Modernt chamber orchestra combined established minimalist forebears with new interpretations of working with small musical cells – or waveforms as the program called it.

In a change to the order of the program we began with the Violin Concerto no.2 of Erki-Sven Tüür, premiered in the composer’s native Estonia earlier this year. Tüür has an intriguing past where progressive rock meets classical, and it has furnished him with a very strong sense of dramatic structure and the gift for vivid storytelling. This work, subtitled Angel’s Share, was all about interpreting the gap of air that appears in the barrel during the ageing of whisky, and how that can be applied to the wisdom of an adult as they grow older, ‘letting go of the unpleasant tastes’ in the words of the composer. 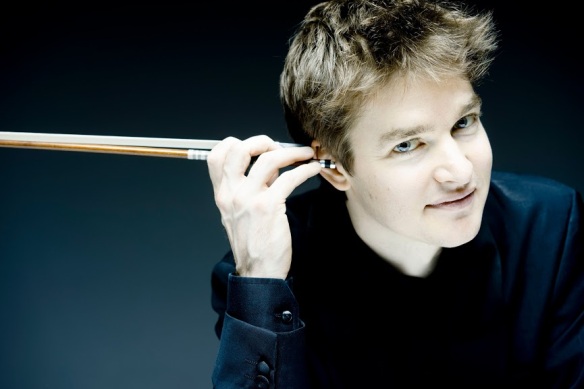 Cannily he captured this in musical terms, culminating with the release of the cork at the start of the concerto’s third movement, where the (sadly unnamed) percussionist dealt a striking blow. The start employed the other end of the percussive spectrum, with a high metallic note from which Ticciati’s solo part germinated. The soloist was superb, inhabiting the part and its distinctive figures, while the strings’ counterpoint was consistently absorbing and meaningful, right up to the affirmative finish. It would be great to hear this work again soon, and certainly those present appreciated it – among them violinist Fenella Humphreys.

John Adams’ Shaker Loops followed, a relatively early minimalist classic from 1978 that remains a success in concert. The near-constant tremolos require great stamina and control on the part of the string players, but that was never an issue with the 19-strong orchestra here, who danced and shimmered in tune with a sensitively handled light display. Double bassists Ben Griffiths and Jordi Carrasco Hjelm were the rock on which the three-movement piece stood, but the way the slower lines undulated over the top was particularly affecting, capturing the deep spiritual roots of the piece – which is after all a representation in music of ‘shaking’. Adams is in thrall to Sibelius when he writes for strings in this way, but the harmonic language is an extension and has a distinctly wide-open, American feel. Ticciati and his charges took us out onto that plain.

Johannes Marmén‘s arrangement of Pérotin’s Viderunt omnes opened the second half, a curiousity that showed how even in the 1200s music had minimalist tendencies. On occasion it was difficult to see Perotin’s original thinking, however, as the arrangement took hold, but the final paragraph from the double basses took us back into his world. It showed how ancient and modern can still integrate – we use largely the same notes after all – and how both are still relevant and complement each other. The fly in the ointment, unfortunately, was extraneous but unidentified noise from the roof of Hall One that threatened to disrupt the performance.

Ticciati had to acknowledge it with a rueful smile before moving straight into the jewel of tonight’s crown, Philip Glass’s Symphony no.3. The previous work in his symphonic output is on Brucknerian dimensions, running for nearly an hour, but in the Third Glass compresses his musical argument into an impressive, cohesive whole. O/Modernt got right to the heart of the small cells that are cleverly manipulated here, but also found the deep emotion of the central Chaconne, which has a dark heart but opens out with major key harmonies to find greater optimism – before going back into the minor key again. It is an ebb and flow that proves extremely affecting on repetition, and was the centrepiece of a fine performance, whose outer movements showed the virtuosity of these string players to the highest degree.

This was a very fine concert and an ideal showcase for minimalism as an extremely valid form of composition, showing also that there is a sizable library beyond the works of Steve Reich. By way of an encore we had Rufus Wainwright in the style of John Adams, his song Across the Universe played with beautiful precision and lovingly directed by Ticciati.