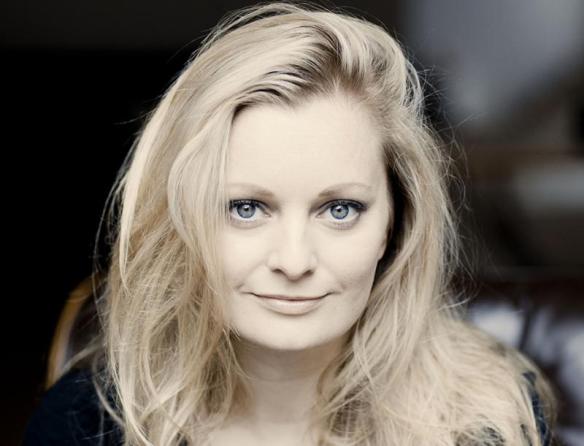 On this evidence Lucy Crowe and Joseph Middleton are two of the finest exponents of English song around. This finely planned recital showed off the versatility in Crowe’s voice, as well as its clarity and pure emotion. Middleton also distinguished himself with some exceptional scene-setting and characterisation of his descriptive piano parts.

The solemn glory of Britten’s Purcell realisations provided an imposing start, although Crowe allowed the expansive setting of A Divine Hymn (from 1:17 on the broadcast) plenty of room to express its excitable joy, with a sparkling finish to boot. O solitude (6:40) was a more thoughtful interpretation and beautifully sung, while the twists and turns of John Weldon’s Alleluia (12:04) were skillfully negotiated. Britten’s expanded piano parts, his own informed response to Purcell’s melodies, were in safe hands thanks to Middleton.

There followed a rarity in the form of Michael Head’s short cycle Over the rim of the moon, from his late teenage years. The ships of Arcady (15:20) featured tolling bells in Middleton’s right hand, while a rapturous Beloved (18:25) gave up its soul. A blackbird singing (19:48) embraced the open air, with a sparkling first note from Crowe, while the cool Nocturne (22:12) sent a light shiver down the spine.

Crowe really came into her own in a sequence of five John Ireland songs. Ireland can be elusive in some interpretations, but not here. As soon as Middleton’s descriptive piano set the scene for The trellis (26:37) Crowe was in her element, using a poignant pause to illustrate ‘the whisper’d words between and silent kisses’. The breathless adoration of My true love hath my heart (29:33) was countered by the finality of When I am dead, my dearest (31:14), which brought a tear to the eye. If there were dreams to sell (33:02) offered a more upbeat outlook, before Earth’s call (34:54) took us right to the water, depicting the plover, cuckoo and stormy ploughland with exquisite detail, all blown by Middleton’s blustery breeze.

After these heights, the Walton Façade settings worked well, Crowe handling the tricky wordplay of Edith Sitwell impressively. Her sideways looks during Daphne (40:47) were brilliantly done, as were Middleton’s persuasive piano rhythms underpinning Through gilded trellises (43:36), where Crowe hit her top B flat with ease. Old Sir Faulk (47:17), with its bizarre lyrics, gave a nonsensical end.

The two encores were unforgettable. Crowe began with an unaccompanied version of She moved through the fair (50:23-53:18), which tugged urgently at the heartstrings, and ultimately brought a tear to the eye. So too did one of Britten’s finest folksong settings, The Salley Gardens (54:20-56:47), a pure and beautiful note on which to end.

Lucy Crowe has not recorded any of the repertoire in this concert, but the playlist below gives leading interpretations of the songs she sang.

For further exploration of the songs of John Ireland, this album gives his complete output: