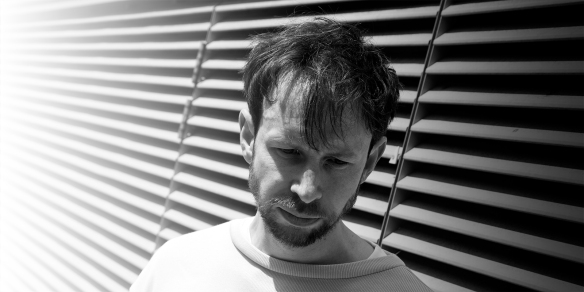 Asked to describe himself, Ryan Teague could easily offer the text of his website biography as a succinct summary. Here the multiple disciplines of composer, sound designer and multi-instrumentalist are listed, with the declaration that the Bristol-based artist ‘combines acoustic sources and arrangements with electronic synthesis and processing to create unique contemporary soundscapes’.

What we could add to that is that over nearly fifteen years of commercially released albums he has travelled through a number of very different styles, rarely visiting the same one twice. We have been able to marvel at his treatment of acoustic instruments in a style that allows the influences of minimalism and the gamelan to be heard. More recently, on the new album Recursive Iterations, he has started to look at algorithms and their use in electronic music.

It is a very distinctive style, as though Teague has joined up a series of different statements that travel round in circles, and each time they pass the listener something has changed. As we talk about his music, he agrees with this first point. “Yes, that’s pretty much it in a nutshell. The algorithm is exactly that, a 360 degree rotation, with every variation possible within the parameters. It’s not always obvious, and some come around more often than others.”

The press release is helpful here, describing how ‘the musical structure is derived from a custom–written algorithmic system that sequences harmonic and rhythmic events in ever-shifting patterns. Hyperreal electro-acoustic phrases and digitally synthesised fragments come and go in continual rotation, re-framed and re-contextualised by their proximity to other events in the sequence as the compositions evolve. The effect evokes a minimalist bricolage, hypnotic and kaleidoscopic in nature, and calls to mind artists such as Oneohtrix Point Never, The Haxan Cloak and Ital Tek‘.

In spite of this detail there is plenty of room for manoeuvre and expression. Some of Teague’s melodies and harmonies are playful, and some are left open-ended, as though he were facing outwards. “I think there’s a sense that it’s constantly leading you somewhere but never quite arriving,” he says. Picking the second iteration as an example, he cites the use of “sounds off an old radio from the 1950s, together with a Hawaiian guitar. They kind of fit together. Getting them to work coherently together is a challenge but one that I really enjoy.”

He has a wealth of experience of music in the longer form – substantial instrumentals on his albums prove that – but also in the shorter attention span world of advertising and TV. Has that helped him with what is a concentrated approach on Recursive Iterations? “It has a bit, but I think the relationship is more derived from exploring certain aspects rather than the film or advert work. It’s getting to the bottom of sound design and pushing sounds to their limits, so that you are finding the very bottom and the very top of each. I guess working in TV stuff you have to get proficient at very broad briefs and sonic requirements, but this was more of a personal point. It helped that I have been working with a really good Hi Fi system and seeing how far I could push it. I have an ARCAM amp and B&W speakers, and on those it has been a real revelation to hear things in such a different way so it informed my work in more recent times.” It also explains why the new album comes into its own on headphones, the full range of its frequencies revealed.

Contrary to expectations, Teague’s training has not been formal. “No, not strictly”, he says. “On my very first press release someone put that I’m classically trained. I’m not, but I went to art school and studied sound intensely. I find that I’m more interested in structures, and I play classical guitar, but I’m not formally trained. I would say I have a good understanding of harmony, and also that I was always ambitious with sound. As a kid I was really making dance music, and that’s what I always thought I would be doing for a while. I have ultimately found beats to be restrictive though. There was a linear path that I had to get off in my early 20s, and I wanted to find ways I could express myself.”

Teague approaches his structures “more through clarity of vision of ideas, and I literally see them visually. I know what I’m going to do before I start. For me the timbre is very visual, so that when I’m working on a metallic piece, I am focused on achieving a particular sonic effect. It’s architectural rather than sitting down at the piano. When you get to constructing harmonies, that’s where you have to sit down and work it out.”

A common mistake from reviewers and interviewers – this one partially included! – is that Teague is influenced primarily by the music of Steve Reich. Yet while he fully respects the work of the master minimalist, Teague’s references spread further afield. “The Reich reference comes up a lot, probably in every review I’ve ever had, but if anything I was much more interested in the work of John Adams, and his sense of structure and development was much more in my early references. Colin McPhee was a big inspiration to me too, because I went on to study the gamelan myself. He achieved things more than 50 years before the likes of John Adams and Steve Reich came along, and is tragically not really credited for that.”

Post-tonal music also exerts a pull, though more in its instrumentation and concentration than its actual harmonies. “Webern is a very strong influence”, says Teague, “distilled down to his element. What he does in his music is not to be afraid of silence, and to use the space between notes to make the maximum impact. For me Webern is incredibly innovative, and massively overlooked. I would also check Morton Feldman, for his use of time, space and colour. A lot of electronic music too. I don’t tend to keep up with what’s going on at the moment, but I do have my comfort music.”

He thinks on, and another name comes to mind. “One reference especially relevant to Recursive Iterations would be Richard Skelton. He pretty much works solely with acoustic instruments, with beautiful strings, drones and treated piano. He sets up a few things that keep happening at various points, using beautiful, shimmering music without being too cheesy. That is a challenge that I set myself, asking how can I set things on their own cycles without getting in their way?”

As befits a composer of several disciplines, Teague is working on a number of different projects concurrently. “I have a TV thing and a film thing, but can’t say too much about either unfortunately. The album was only finished back in July so I’m formulating my next project, which will be very different. I am thinking perhaps of something in the live arena with a different energy. The studio can be a bit lacking on its own so I’m keen to open things up and take in a different energy. I have ideas forming in that area!”

He agrees that Recursive Iterations is very different to previous albums, “I’m never a good judge of that sort of thing, but that’s happened before. It is certainly very different to the kind of guitar-based stuff I did for Causeway or when I worked with the gamelan for Storm Or Tempest May Stop Play. That has been dance music with acoustic instruments.”

“I could almost have different audiences for different projects”, he considers, “because I go through different phases of different styles and I’m quite clear about the sonic worlds those things inhabit. Recursive Iterations sounds more electronic, and thinking back I guess Burial would be another key reference. Sometimes I think I’m not representing myself very well, with such different styles!”

At this point the music of a composer such as Beethoven comes to mind, the composer able to move between such contrasting forms as symphony, string quartet, piano sonata and song. “I think it changes as the scene evolves, thinking of the present day”, says Teague. “With the post-classical scene my involvement was back to 15 years ago, with the Six Preludes but more recently it’s gone nuts. I’m trying to do something else now. Maybe I could cash in and do loads of piano music now, so that we could play it to people in offices and pacify them! These things all get capitalised on and it becomes a business. So many labels are jumping on that and it’s a bit too late now. The album I’ve just finished was a bit of an antidote to that for me, with the idea to do something bolder sonically.”

Ryan Teague‘s new album Recursive Iterations is self-released on Friday October 25. It can be heard and purchased from his Bandcamp site below:

Stay tuned for a special playlist from Ryan, exclusive to Arcana, in the coming days!