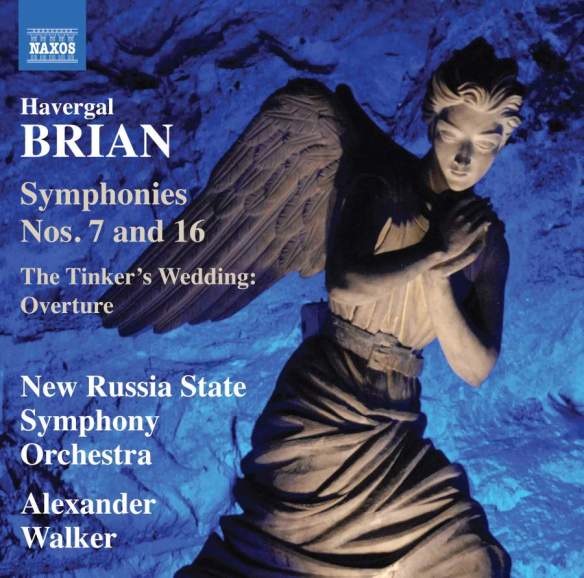 Naxos continues its traversal of the symphonies by Havergal Brian (1976-1972), once more with Alexander Walker and the New Russian State Symphony for two works as rank among the composer’s most impressive in this genre – plus one of his most appealing shorter pieces.

The Sixth and Seventh Symphonies saw Brian’s active return to composition after a hiatus of four years. Whereas the former is in a taut single movement, the Seventh Symphony is a four-movement work on a Brahmsian scale and its composer’s final such symphony. Inspired by the chapters of Goethe’s autobiography concerning his student years at Strasbourg, where he was never to return, the work charts a course from innocence to experience which might (as John Pickard surmises in his booklet note) extend to the degradation of Teutonic culture over the Nazi era. Walker has the measure of the out-going initial Allegro, not least its musing central episode, then points up the energy and extroversion of the scherzo. In its amalgam of intermezzo and Adagio, the third movement unfolds from fugitive restlessness to an anxious searching whose emotional depth is undercut by Walker’s relative swiftness, yet he brings due purposefulness to the Epilogue with its remorseless motion towards a coda whose bell-clad remoteness fairly encapsulates the ‘Once upon a time’ aura of intangibility at the heart of this ambivalent work.

Forward 12 years and the Sixteenth Symphony is the highlight of a group of one-movement such pieces where Brian wrestled with new possibilities of formal and expressive continuity. Here the overt rhetoric of its three predecessors is replaced with a tensile momentum which accumulates across its six sections. Walker draws due expectancy from its slow introduction, then finds brusque energy in the allegro and playful fantasy in those quixotic variations on a ceaselessly changing ‘ground bass’ that follow. The main slow episode evinces real nobility, and if the ensuing fugal galop undeniably taxes orchestral coordination, the closing section moves methodically though confidently towards a heady cadential QED as only Brian could have conceived. Absence of any concrete ‘programme’ only adds to this work’s fascination.

Opening this disc is the second of the ‘comedy overtures’ that span Brian’s creativity. Taking its cue from the play by J. M. Synge, The Tinker’s Wedding is a blueprint for its composer’s final years as it alternates hectic energy and pensive musing prior to a tersely decisive close.

Yes. Brian may be an acquired taste, but his output contains numerous pieces of undoubted quality and the two symphonies featured here are, in their appreciably different ways, among his best. If the playing of his Russian players is intermittently less assured than that accorded Charles Mackerras in the Seventh (EMI/Warner) or Myer Fredman (Lyrita) in the Sixteenth, Walker is demonstrably his own man when it comes to an interpretative stance. Those who are new to Brian’s music will find this release starts them, qualitatively speaking, at the top.

Indeed. Sound is a little airless, but this is not to the detriment of the intricacy or dynamism of this music – with annotations that could not be more authoritative. Hopefully Walker and his orchestra will record the nine remaining Brian symphonies yet to be covered by Naxos. 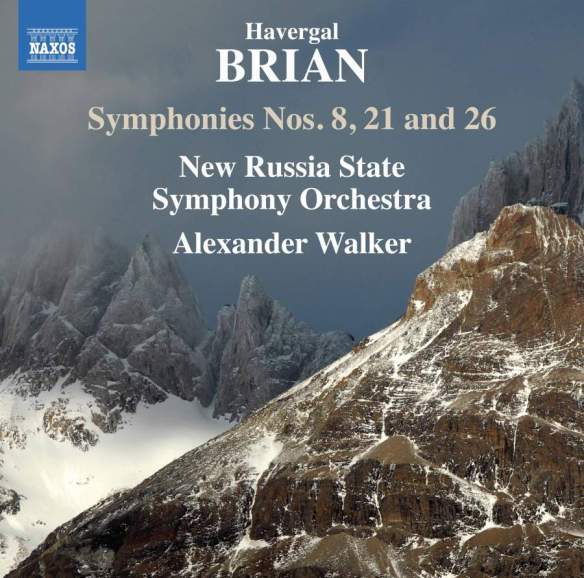 Naxos’s Havergal Brian cycle, begun a quarter-century ago on the Marco Polo label, reaches an important milestone with a disc that features the composer’s only previously unrecorded symphony, alongside notable such works from his middle- and late- periods.

The premiere recording is that of the Twenty-Sixth Symphony, written as Brian approached his 90th birthday and among his most concentrated – for all that the overall mood is one of relative good humour. Of its three allegros, the first is a boisterous sonata design that cannily elides development and reprise, while its successor is a lively intermezzo with unexpectedly aggressive trios then a pointedly understated ending which leads directly into the finale – an off-kilter rondo whose more ambivalent episodes make possible a coda whose decisiveness is more than a little fractious. Unheard since two performances in its composer’s centenary year, the piece yields unexpected subtleties – Alexander Walker drawing a tensile response from his New Russia State Orchestra forces in this lesser while not unappealing addition to the Brian canon.

The significance of the Eighth Symphony has never been in doubt. If not the first of Brian’s one-movement such works, it is the first in which this composer grappled with the potential of symphonic continuity in earnest. Compared to Sir Charles Groves’s 1977 recording (EMI/ Warner), Walker opts for less strongly characterized individual sections in favour of greater underlying cohesion – the piece thus emerging as more than the sum of its already fascinating parts. A further plus is the definition accorded harp and piano, their contribution being crucial to the motivic evolution of music whose mystical qualities are offset by elements of sardonic humour and fraught eloquence. Nor are the enigmatic final bars undersold, though the quiet concluding dissonance as horn and trombones collide might have evinced greater presence.

By comparison, the Twenty-First Symphony tended to be heard as Brian’s marking time prior to embarking on a new and more challenging phase. This, at least, was always the feeling of Eric Pinkett’s pioneering 1972 account with the Leicestershire Schools Symphony Orchestra (Unicorn/Heritage), though such equable classicism has little place in Walker’s conception – the charged opening Allegro, its gawky introduction transformed into a surging coda, being a case in point. The Adagio emerges as one of its composer’s most searching, its increasingly wracked expression barely held in check, then the Vivace’s nimble scherzo with two livelier trios makes way for a finale whose muscular variations build inexorably toward an apotheosis the more powerful for its relative succinctness in what is an unequivocal statement of intent.

Indeed. This is a major appraisal of three contrasting Brian symphonies, grippingly conveyed by an orchestra which now sounds audibly at ease with this composer’s recalcitrant idiom.

Yes, not least when the recorded sound is arguably the best yet secured from this source, and John Pickard’s booklet notes offer a wealth of informed observation. Incidentally, the Eighth Symphony has not been performed since a 1971 broadcast and never given in concert. Maybe Alexander Walker would like to take the plunge as this piece approaches its 70th anniversary? 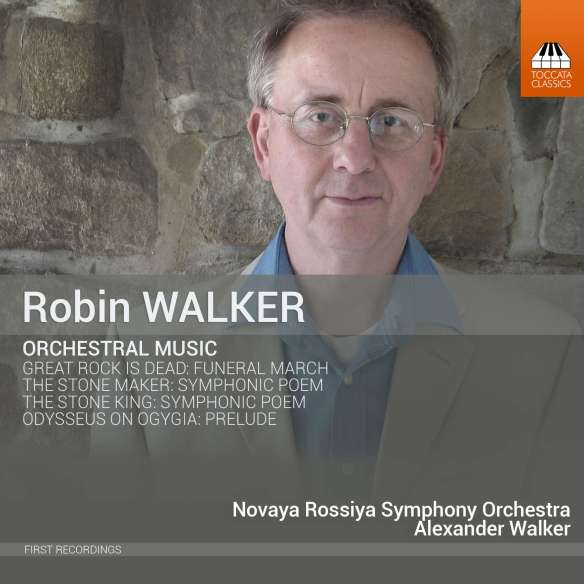 The first disc devoted to the orchestral music of Robin Walker (b1953), whose idiom evolved over several decades before arriving at the singular and uncompromising music featured here, in what is another venture facilitated by the redoubtable Martin Anderson of Toccata Classics.

Readers with longer memories may recall certain pieces by Walker which attracted attention during the 1980s, not least the ensemble piece Dance/Still and the plangent Seven Last Words for electric guitar and percussion. Several of his chamber and instrumental works were issued by Riverrun Records (RVRCD66) at the turn of the century, yet anyone familiar with that disc will likely be surprised with what they find here. Interesting, too, that Walker (to judge by his website) is intent on covering his tracks, Ustvolskaya-like, regarding most of his earlier music.

Much the longest work is The Stone Maker, completed in 1995 after an eight-year gestation and described as a symphonic poem, though it could be assessed in terms of a one-movement symphony. The composer’s booklet note avoids any concrete programme, focussing instead on its modification of symphonic archetypes (notably Beethoven’s Fifth and Brahms’s First) in the light of his own aesthetic. This is worth bearing in mind because, unlike numerous of his contemporaries, Walker has not repudiated Modernism per se but reintegrated it into his highly individual take on the musical past. Tippett and Birtwistle are mentioned as guiding presences, and the more visceral passages of this work do indeed recall the latter composer (notably his Earth Dances), but there is equally a modally-inflected tonal underpinning such as sustains its 32 minutes with demonstrable purpose. No less striking are those stretches of more inward expression, notably that before the inexorable final build-up – while the tailing-off that ensues, and the suspenseful concluding bars are both realized with exquisite finesse.

None of the shorter pieces that emerged a decade on suggest a notable broadening or opening -out of Walker’s approach. The Stone King (2005) is another symphonic poem, though here the overall duration (barely a third of the earlier piece) militates against the emotional force shoe-horned into this music with its elemental ground-plan of equilibrium lost then regained. Great Rock is Dead (2007) is a funeral march inspired by the death of the composer’s father, implacable in its forward motion though any sense of emerging triumph is tenuous at best – not helped by the Bruckner-cum-Sibelius bathos of a coda that fails to convince. Best is the Prelude to Odysseus on Ogygia (2011), as adapted from the eponymous opera Walker wrote after 1995 and whose simmering intensity bodes well for this 90-minute ‘staged symphony’.

Not always (as detailed above), but when it does come together this is impressive music – imbued with that sense of naturally accruing momentum which readily holds the attention. Anyone responsive to the tradition within which Walker is working needs to hear this disc.

Indeed, especially given these performances are so attuned to its essence. Alexander Walker secures a committed response from the Novaya Rossiya Symphony Orchestra, which is heard to advantage in a recorded ambience that amply brings out the filmic opulence of this music.
To listen to clips from this release and for further information visit the Toccata Classics website, while for more on Robin Walker you can visit the composer’s website