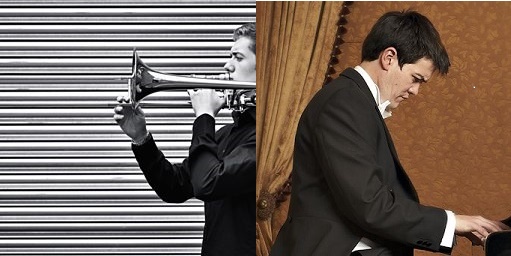 Peter Moore is a remarkable talent.

Winner of the BBC Young Musician of the Year crown at the age of 12, co-principal trombone of the London Symphony Orchestra at 18 and now one of the BBC Radio 3 New Generation Artists, he looks set for a long and lasting career at the top, if this superb recital is anything to go by.

The same can be said for partner in crime James Baillieu, a pianist of great sensitivity and style, whose musicality and technique mark him out as a very fine accompanist – using that term with the knowledge that it is not a secondary role!

The recital, a rare chance to experience the trombone in a solo capacity, was full of thrills and spills. Moore began with a flourish, the enjoyable Urban Variations of fellow trombonist James Maynard an evocation of three different cities – Berlin (from 1:42 on the broadcast), London (a calm St John’s Wood park at 3:10) and the bustle of New York (8:13)

Then Moore explored more romantic repertoire in straight transcriptions of three Fantasy Pieces by Schumann (10:59), a song by Duparc (26:13) and the slow movement of Rachmaninov’s Cello Sonata (30:55), with an original piece from the Danish composer Axel Jørgensen added for good measure.

The Schumann was a tricky one for both performers to balance. It was superbly played but at the back of the hall the piano was a way back in the balance at times. The Duparc and Rachmaninov fared very well, an inspired pairing that proved a great showcase for Moore’s breadth of tone, while the Jorgensen (from 21:00) was a bright piece, dappled with sunshine.

The coup de grace, though, was a brilliant performance of Hindemith’s Trombone Sonata (from 38:25). Rarely heard in the concert hall these days, the composer’s music gets an unfair deal. Moore and Baillieu showed us why this is wrong, with plenty of humour, grace and a gritty resilience, the latter quality due in part to the work’s composition in 1941, around the Second World War. Both players performed heroically, whether it was Baillieu catching the rhythmic drive of the music, or Moore moving between technical trickery and sudden if brief lyrical asides. The third movement, wonderfully described as a Swashbuckler’s Song, found Moore at his outspoken best.

The two followed with a work by Sousa’s go-to trombone man, Arthur Pryor (from 48:50). Annie Laurie, an air and variations on the traditional Scottish tune, was a winning performance, the audience alternately gasping at Moore’s technique or laughing at some of the outrageous and funny musical statements. The encore, which was inevitable after a concert of such good quality, was an arrangement of Charlie Chaplin’s Smile (54:38)

If brass playing is your thing, I would urge you to catch Peter Moore live – and soon!

The music played by Peter Moore and James Baillieu is included in the Spotify playlist below.