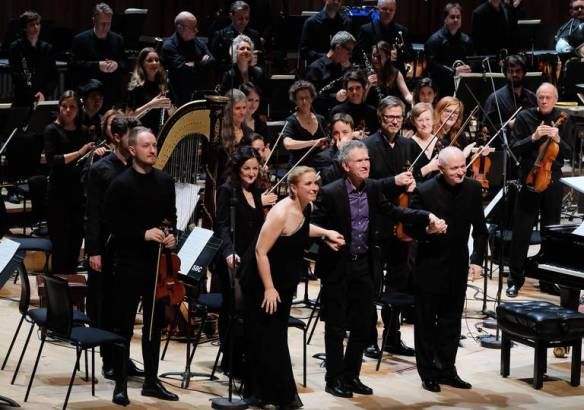 With a bold slogan Unfinished Business – We’re 50, the London Sinfonietta illustrated at their birthday concert exactly why the ensemble remains such a vital cog in the musical life of the capital and the UK.

Their relentless drive for the new, the original, and the game-changing, is coupled with a level of musicianship that remains at the very highest in all they do. This concert reminded us of those things, while a couple of tactful presentations drew attention to the inspirations behind the music, as well as highlighting those who were sadly not able to experience the half-centenary birthday.

To the music – and a short fanfare to begin in the form of The Message, written for the Sinfonietta’s 40th birthday by one of the composers to help shape the ensemble, Sir Harrison Birtwistle (from 4:43 on the broadcast link above). It began proceedings with appropriate ceremony, brilliantly played and controlled by the spotlit trio of clarinettist Mark van der Wiel, trumpeter Alistair Mackie and percussionist David Hockings.

Stravinsky’s Octet followed (from 7:43-23:19), conducted by one of the ensemble’s founders, Sir David Atherton. This was a colourful account, enjoying the outdoorsy and often playful writing for the less-than-usual combination of flute, two clarinets, two bassoons, two trumpets, trombone and bass trombone.

The short introduction ushered in the perky main theme of the first movement (from 9:12), but it was in the second movement (12:01) where the Sinfonietta really excelled, the flurries of notes brilliantly delivered by clarinets and bassoons. The third movement (12:10) enjoyed Stravinsky’s pointed interactions between the instruments, bassoons again dictating the rhythmic impetus.

The first half ended with Ligeti’s Chamber Concerto, written in 1970 and continuing to dazzle with its innovations in tone and sonority (from 27:35-47:05). Atherton worked with the composer on the score, so this ‘first hand’ performance had real authority. It was a performance of exceptional detail, the atmospheric effects hushing the audience almost in to a stage of hypnosis in the quieter moments.

By complete contrast the harsher interventions had the power to make the listener jump, meaning a return to the state of hypnosis was needed for some nerves to be kept intact! The players were terrifically alive to the changes in mood and colour, and in those loud moments (e.g. 38:54) Clive Williamson’s piano added an edge of visceral power.

If the first half was a summation of the London Sinfonietta’s expertise with established 20th century repertoire, the second reaffirmed their commitment to the very new.

Deborah Pritchard’s commission River Above, a world premiere, gave us a marked change in sonority as we turned to the solo saxophone of Simon Haram. This was a brilliantly played piece, exploring the timbre of the instrument to good effect through long-breathed phrases (1:28:00-1:36:49 on the broadcast).

This was followed by a second world premiere, Samantha Fernando’s Formations (1:40:41-1:49:17) for an ensemble of 15 players. This was much more immediate in its impact, beginning with imposing block chords before moving to a section with sharp, barbed wire edges to the texture. Throughout there were fascinating and colourful sonorities and strong tonal associations, before the piece began to move forward with greater purpose towards the end, which if anything came too soon.

Danish composer Hans Abrahamsen has enjoyed a close association with the ensemble since the late 1960s, so the inclusion – and London premiere – of Left, alone, a Concerto for piano (left hand) and orchestra (1:58:30-2:19:00), conducted by George Benjamin, was wholly appropriate. The much larger orchestra and piano required a considerable break while the heroic front of house team expanded the, but the wait was worth it – for this was an apt choice.

Starting with a real show of strength, soloist Tamara Stefanovich had terrific energy, the piano outlining a bold rhythmic profile in the lower register but then moving higher, accompanied by the large ensemble. As Abrahamsen says in the interesting interview with Sara Mohr-Pietsch on the radio broadcast, the wiry tones of the large ensemble are essential to the overall sound, preferable to the fuller symphony orchestra approach. This was clear as the piece progressed, becoming less of a battle between left hand and orchestra; more an integration of the two different sound worlds, so that when twinned with the bassoons at the end the sound palette burbled like a hot spring.

Finally there was a collaborative commission, a collage of Variations on a Hornpipe by Henry Purcell (from 2:24:31-2:42:46 on the broadcast link), conducted by Vladimir Jurowski. The variations were written by 14 composers with Sinfonietta connections, and were followed by an altered statement of the hornpipe itself written by 10 more. All contributions were woven together under the direction of John Woolrich, who composed the beginning and end.

The best advice here is to listen to the introduction on the radio, then to guess who might be the composer of each fragment as the piece proceeds! A stately, ceremonial air surrounded the piece at its start but gradually the variations moved it further from the source. Perhaps inevitably the fragmented approach led to a disjointed whole at times, with a short attention span – due to the number of composers involved rather than Woolrich’s sterling work in getting the music together.

It was however a suitable showcase for the Sinfonietta as an ensemble, proving beyond doubt once again that their virtuosity knows no bounds, and ended with a flourish – as though to say, “Here’s to another 50 years, at the very least”. And so say all of us!

A 50th anniversary tribute will follow on these pages soon.

You can listen to an album of Hans Abrahamsen’s music made by the London Sinfonietta in 1997 on Spotify: 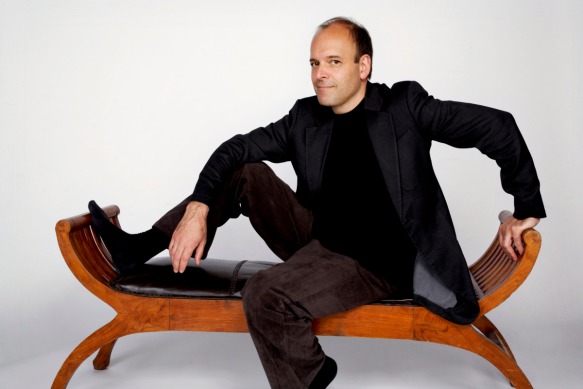 Louis Lortie has a long-held affinity with the music of Chopin, and that was abundantly clear in the affection with which he played the composer’s 24 Preludes.

Completed in 1839, they are an extraordinary set of pieces that travel through each of the conventional Western tonal centres in the course of just 40 minutes. Chopin structures them cleverly, pairing them up so that each prelude appearing in a major key (for instance the first one in C major) is followed by its closest relative in a minor key (in this case A minor). The series proceeds using the ancient ‘cycle of fifths’, so that after ‘C’ we move to ‘G’, then ‘D’, and so on until a complete circuit is reached.

Previous exponents of this sort of cycle include Bach, whose famous ‘48’ also uses all the keys, but moves in a stepwise movement from C to C sharp, then D. In visiting the form Chopin was clearly aware of Bach’s efforts in the previous century, for he took the music with him on holiday to Majorca, where some of the preludes were written.

Lortie brought the cycle to life (from 18:06 on the broadcast link provided), with some of the shorter pieces reeled off at dazzling speed. The quick ones, for instance those in G major (21:02) or a particularly stormy affair in F sharp minor (27:29) were on occasion a bit too swift for the phrasing to be abundantly clear, but when he spent time over the melancholic no.4 in E minor (21:57), or the serious no.6 in B minor (24:37), the melodies were beautifully shaped, the depth of feeling immediately evident.

The natural centrepiece of the cycle is no.15 in D flat major, known as the Raindrop (from 36:27). It is at least twice as long as any of the others but also contains at its heart a very strong reference to plainchant, the speculation being that Chopin was capturing a haunted abbey in his writing. It looks forward to Debussy in this sense, and Lortie played it with the grandeur it deserved. Following it with the whirlwind B flat minor prelude (41:50) was the storm after the calm, the whirlwind superbly energised.

A beautifully crafted finish included the delicacy of the F major prelude from 51:35) and the stern countenance of the final D minor prelude (52:25), carrying its head high to put a cap on a superb performance of 24 strongly characterised pieces.

A little less effective were the 6 Canonic Preludes by George Benjamin, written so that whatever is played in one part has to be shadowed by the other. Some of the pieces were effective characterisations, not a million miles from Schoenberg’s mysterious piano pieces, but others felt emptier emotionally. Lortie played them superbly, but perhaps repeated hearing on the broadcast will bring them to life.

Lortie is in the process of recording the complete piano works of Chopin, and his first album in the series for Chandos is a great next step after the Preludes, containing as it does the great Piano Sonata no.2.