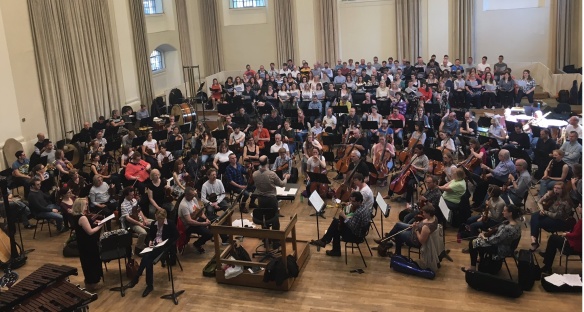 The Kensington Symphony Orchestra‘s 63rd season got off to a most impressive start with tonight’s concert of American music (simultaneously continuing the Americana ’18 festival taking place at St John’s during this year), opening with the Fanfare for the Common Woman with which Joan Tower launched her wider reputation over three decades ago. Rhythmically bracing while not without harmonic subtlety, it provided a fitting showcase for the KSO brass and percussion as well as a pertinent tribute to this composer in the year of her 70th birthday.

Leonard Bernstein‘s centenary was marked with his Divertimento, seven succinct movements that touch upon most of his salient traits and a reminder that his latter-day creativity was one where less equals more. Highlights include a delectable Waltz (enjoying frequent exposure on Classic FM), wistful Mazurka, evocative Blues then a rousing March: The BSO Forever whose Johann Strauss take-off duly makes for an uproarious close. Suffice to add the KSO was not found wanting in a piece written for the Boston Symphony’s own 100th birthday.

As Russell Keable‘s opening remarks made plain, John Adams’s Doctor Atomic Symphony was an altogether more serious proposition. First heard at the 2007 Proms, the rather diffuse 45-minute work in four movements was duly streamlined into a continuous structure lasting barely half an hour. Surprising, then, that the result seems less than cohesive – its reworking of material from the composer’s third opera one of cinematic contrast than symphonic unity. Some of his most virtuoso orchestral writing, which the KSO tackled with relish, is hampered by the recourse to post-minimalist gestures that remain Adams’s (unwitting?) stock-in-trade. Even the final section, a setting of John Donne‘s sonnet Batter my heart with its baritone part taken by trumpet (here the mellifluous Stephen Willcox), felt less than truly affecting.

After the interval, a welcome revival (likely the first in London for two decades) for William Schuman‘s Third Symphony. One of a triumvirate of such pieces by American composers to emerge either side of the Second World War, it evinces a formal integration and expressive panache that its composer never surpassed – not least in the way its four movements are arranged in two larger parts such as complement each other unerringly, and with a steadily accumulating momentum which emerges across the whole in what is itself a marvel of tensile dynamism.

Keable delineated the variations of the initial Passacaglia with assurance, ensuring textural clarity here and in the ensuing Fugue while underlining how the numerous woodwind and brass solos emerge naturally from the string polyphony rather than sounding laminated onto it. Nor was there any lack of emotional poise with the Chorale, its understated eloquence in contrast to the inexorably mounting impetus of the closing Toccata whose final pages are as visceral as any in the symphonic literature – not least when rendered with such verve as here.

A memorable reading of a seminal though under-appreciated piece such as the KSO has long championed. Hopefully future seasons will see revivals of comparable American works – the Second Symphony of Roger Sessions and Seventh (Variation) Symphony of Peter Mennin.