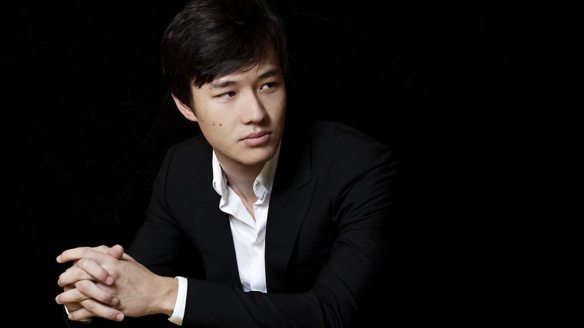 A piano trio of exciting soloists gave this memorable concert at the Wigmore Hall as part of BBC Radio 3’s Lunchtime Concert series.

Pianist Louis Schwizgebel, violinist Benjamin Beilman and cellist Narek Hakhnazaryan are all making a name for themselves on their own terms, but by uniting for chamber music performances illustrate the very first principles of why this music was written.

Before their stylish performance of Mendelssohn’s Piano Trio no.1, we heard them in early Shostakovich – his first of two works in the popular form. The Piano Trio no.1 is not a typical work in the context of the composer’s full output, however – but it does show a prodigiously talented 17-year old student making formal innovations and writing heartfelt music, in this case pointing towards the work’s dedicatee, Tatyana Glivenko.

Shostakovich’s teacher Maximilian Steinberg perceived his increased ‘enthusiasm for the grotesque’, documented in Anthony Burton’s excellent notes for this concert, but looking back in the context of the composer’s full output this fascinating work revealed more of a debt to Russian romanticism than could initially be expected.

Beilman and Hakhnazaryan picked up this connection in their ardent melodies, while the steely piano of Schwizgebel gave some clues as to the source of Steinberg’s displeasure. Here though they put the seal on an outstanding account of music full of energy but with its excesses curbed through Shostakovich’s compact design. A captivating performance which is well worth experiencing from 2:14 on the broadcast link.

The inclusion of Rachmaninov’s Vocalise (from 17:50) made good sense in the context of the Shostatkovich. Made by Gayane Hakhnazaryan, mother of Narek, this arrangement illustrated the versatility of Rachmaninov’s original, more familiar to us in orchestral guise or for solo instrument with piano. Violin and cello dovetailed beautifully here, the trio managing the balance with an appropriate blend of nostalgia and poise.

Mendelssohn’s Piano Trio no.1 is perfectly suited to a recital such as this, a piece with virtuoso demands that would appeal to the soloists but also a work whose close integration brings a special intimacy to its more reflective moments. This was a terrific performance, the darker colours of the first movement established immediately in Hakhnazaryan’s heartfelt cello subject (27:02). A doleful second movement Song without words was lighter but also touching (37:04), before the twinkling right hand figures of Louis Schwizgebel led a sparkling account of the Scherzo (44:20).

The finale fused all these qualities, starting in relative seriousness and darkness (48:04) but finding bright light as the music transferred subtly but gloriously to the major key (55:16).

As an encore the Scherzo twinkled again, completing a concert notable for its fresh, enthusiastic and virtuosic qualities. Catch it if you can!

The music in this concert can be heard in the best available recordings on Spotify here: 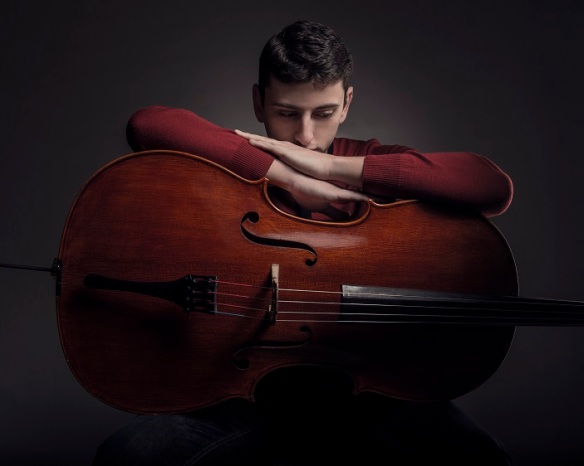 on the iPlayer until 23 December

In case you cannot hear the broadcast, here is a Spotify playlist of some the music in this concert. Narek Hakhnazaryan has not yet committed any of these works to disc, though the Khudoyan solo sonata is available to watch on YouTube below:

Alternative versions of the Schumann and Mendelssohn can be heard below:

Schumann found in the cello an instrument with which he could express his music naturally, and his music for the instrument ranges from a late Cello Concerto to various ‘fantasy pieces’ for cello and piano. Five of these, the Funf Stücke im Volkston (Five Pieces in Folk Style) are vignettes for the combination where Schumann is clearly enjoying himself, music that ranges from the playful first and fourth pieces to the warm of the lyrical lullaby.

I have to confess this was my first encounter with the music of Adam Khudoyan (1921-2000), though, as the Wigmore Hall booklet writer Brian David discussed, he was one of Armenia’s most highly-regarded twentieth-century composers. He completed his Solo Cello Sonata no.1 in 1961, the first of a number of works for the instrument. It is a relatively short but intense work, David writing that ‘it has at its heart a deep, extended lament that moves between extremes of sorrow and anguish’.

Mendelssohn’s middle period of composition saw him writing with incredible spontaneity, and it is into this part of his career that both his major works for cello fall. Both of his cello sonatas are rich in expressive melodies and positive feeling, and the outpouring of good spirits at the start of the Second is difficult to shake off through the work. It does have a profound side too though, found in the slow movement where Mendelssohn works a prayerful chorale in a manner often interpreted as a contemplation of his dual Jewish/Christian heritage.

From this evidence the partnership of Armenian cellist Narek Hakhnazaryan and Russian pianist Pavel Kolesnikov is most definitely one to keep an eye on. The duo clearly enjoy the music they make together, and while the perception is that Narek is the one to wear his heart on his sleeve more obviously, Pavel provides some wry humour as a counterpart.

That was most evident in the second movement of the Mendelssohn, where the piano phrases were beautifully shaped and strung out just a bit longer to enhance the witty theme. This performance was excellent, maybe a bit over-wrought in the first and last movements but reaching a degree of stillness in the slow movement that was very moving.

Their Schumann was also very enjoyable, played with a very fresh approach and again with a nice dash of humour. This music is rich in melody and the two clearly enjoyed each new tune and turn of phrase.

It was also very satisfying to hear the Khudoyan sonata for the first time, extending this Armenian’s credentials as an extremely proficient writer for cello. The use of folk melodies gets us close to the heart of Armenia quickly, and it was clear from his expression that Hakhnazaryan felt the same way. A technically superb and emotionally charged performance of music that has real concentrated expression.

1:32 – a bright and slightly mischievous first piece, marked ‘Vanitas vanitatum’, where the spiky cello and detached piano embark on a breezy march. The middle section from 2:50 is by contrast heavier and assertive.

4:49 – a rather gorgeous lullaby, led by the cello with dreamy accompaniment from the piano.

8:46 – a graceful dance that is a little within itself, the cello elusive and the piano quiet as though in thought. Perhaps a sign of shadow that suggests this to be a later composition – though the warmer middle passage, where the cello plays chords, is a much more positive complement.

14:47 – the last piece is quite a frenetic affair that sounds almost as though it could have been written by Brahms. Here the cello and piano are in much more obvious dialogue with the syncopated rhythms.

19:36 – the solo sonata starts with a bold statement, with chords on the cello. The forceful and heady mood. It brings to mind a little the rather bigger sonata by Kodály, especially at 20:45 when a slower tune is heard, one that seems to be inspired by folk music.

There are some quite jarring moments where Khudoyan puts two pitches very close together but overall the sonata is full of powerful and moving melodic lines, the composer using the cello chords as more of a rhythmic prompt.

25:45 – from here the cello has a brief but thoughtful section of ‘pizzicato’ (plucking) before the material from the beginning returns with even greater force. The piece ends with powerful chords.

29:33 – right from the beginning it is clear this is going to be a positive piece. Cello and piano open together with a sweeping melody, and the piano part is typically busy for Mendelssohn. The cello retains a song-like delivery to its melodies, and the music continues to surge forward strongly, suggesting the composer’s inspiration was very instinctive at this point in his life. The main theme returns at 34:00.

37:33 – this is a lovely example of Mendelssohn’s lightness of touch, a piece of music that has subtle humour and a memorable tune to go with it. This is introduced by the piano and repeated by the pizzicato (plucked) cello. A contrasting and flowing theme crops up at 39:22, before the main ‘scherzo’ material comes back at 40:49. A strong coda section begins at 41:58, with a more obviously romantic mood in the cello line.

44:04 – the slow movement begins with a set of chords from the piano that sound rather like a hymn (or ‘chorale’). The top note of each of these chords forms the melody which the cello eventually takes up, reaching an impressive intensity at 47:02. Then a meditative passage takes place over a long held note on the cello. The whole movement is almost certainly under the influence of Bach in the stepwise manner in which it moves and is beautifully simple.

49:44 – the finale returns us to the brisk manner of the first movement, cello and piano ducking and diving as they move towards the main theme at 50:09 on the cello. The music proceeds at a bustling pace, often with little opportunity for breath, as though Mendelssohn were writing music as fast as he possibly could!

57:54 – an encore in the form of an arrangement for piano of Rachmaninov’s Vocalise. A lovely, romantic, slow moving piece of music where time slows down a little – for nearly seven minutes, in this case!

If you enjoyed the Mendelssohn and Schumann in this concert then there is more to explore in the cello and piano repertory from both composers. A very attractive account of Mendelssohn’s complete music for the combination can be found here, played by Antonio Meneses and Gérard Wyss:

The same combination released an album of Schubert and Schumann works for cello and piano in 2006, on which the Schumann pieces all make a lasting impression – as does Schubert’s substantial Arpeggione Sonata: