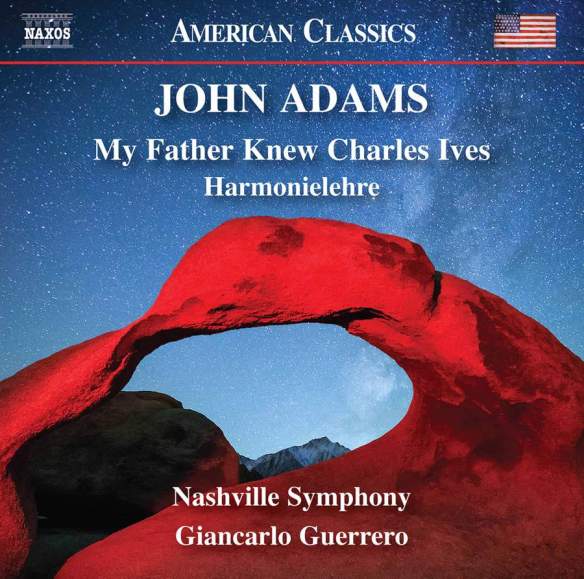 Naxos adds to its coverage of John Adams with this release featuring two major orchestral works – the one among the most enticing of his latter-day output, the other among the most characteristic (and recorded) of the pieces that first accorded him international prominence.

Adams has long expressed a penchant for the music of America’s great visionary of the late-Romantic era, and My Father Knew Charles Ives is his oblique while affectionate homage to the composer who gave American classical music its aesthetic basis. Not that the title should be taken literally – rather, the work’s three movements add up to an inclusive portrait of Ives in a way not dissimilar to that of the composer’s orchestral sets. Thus, the opening Concord deftly identifies the cultural environment behind Ives’s thinking besides alluding to some of his most inimitable music, while The Lake builds upon this with evocative and atmospheric writing whose concertante role for piano also finds resonance in the senior composer’s music. The final and longest movement, The Mountain returns to those transcendental strivings as infused Ives’s creative maturity, though its finely sustained initial pages are not followed up by the falling back on well-rehearsed minimalist routines that ensue. Conversely, the closing pages inhabit an ethereal introspection as makes for an understated and affecting apotheosis.

Hard to believe it is now 36 years since Harmonielehre first blazed a trail over the Western musical landscape, or that what once provoked extreme reactions (causing a near riot at the 1987 Huddersfield Contemporary Music Festival) should have come to represent a musical lingua franca imitated many times in the interim. That this earliest of Adams’s ‘symphonic’ works remains among his most representative is fully reaffirmed here. Giancarlo Guerrero finds a viable balance between drama and lyricism in the lengthy opening movement, then builds the mingled Wagnerian and Mahlerian resonances of The Amfortas Wound toward a climax of potent anguish (if such is the music’s intent). The luminous opening of Meister Eckhardt and Quackie demonstrates the best in the Nashville Symphony – as with its superb release of Christopher Rouse (Naxos 8.559852) – and while even astute pacing cannot make the closing peroration sound other than manufactured, the approach yields a methodical and eventful sense of purpose as makes its ‘travelling in hope’ more compelling than any arrival.

It does, from the perspective that Adams often makes his larger-scale works cohere through sheer force of impact more than formal ingenuity – his trademark post-minimalism proving renewable at almost every turn. Guerrero’s take on My Father Knew Charles Ives is certainly preferable to the composer’s rather calculated account with the BBC Symphony Orchestra (Nonesuch), while his Harmonielehre can rank high among the seven available recordings of this piece – among which, Kent Nagano with the Montréal Symphony Orchestra (Decca) currently leads the field.

Yes, not least when recording and annotations are first rate. Hopefully, future Naxos releases of Adams will explore further his extensive back catalogue and revive such as the impressive ‘symphony’ El Dorado, which still awaits its second recording after virtually three decades.

For further information on this release, and to purchase, visit the Naxos website. For more on John Adams, the composer’s website is a great resource. Meanwhile the Nashville Symphony website is here, and you can visit conductor Giancarlo Guerrero’s website here