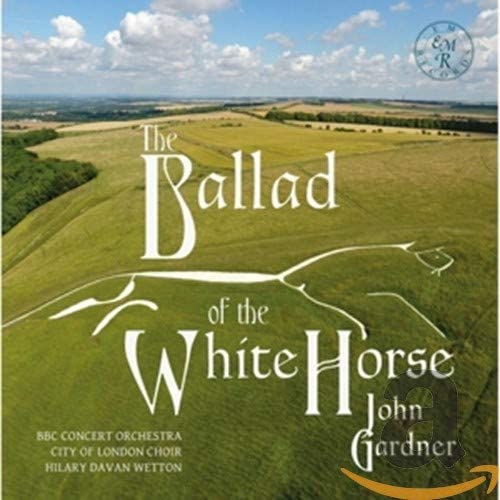 EM Records issues a further release devoted to John Gardner (1917-2011), featuring one of the most significant among his numerous larger choral works and one of the most engaging among his orchestral pieces. Both are accorded performances of dedication and commitment.

Although he essayed a succession of works in all the main genres during the 1950s, Gardner later felt that his cantata The Ballad of the White Horse marked a watershed both stylistically and in the practicable nature of its writing. Drawing on the epic 1911 ballad of that name by G. K. Chesterton (reduced by Gardner from over 500 verses to less than 100), this relates the story of King Alfred as he seeks to free England from the Danish yoke; culminating with the defeat of King Guthrum in the Battle of Ethandune, the latter’s converting to Christianity and his subsequent baptism. All of which is played out against the already ancient White Horse at Uffington – grown over and neglected as a reflection of the people’s moral failings, thence to be scoured when England rises again in what is yet a perpetual process of decline and renewal.

As ‘ballad’ ostensibly suggests, this piece features a great deal of choral singing in rhythmic unison with recourse to more polyphonic writing mainly at key junctures, though such is the suppleness of Gardner’s harmonic thinking that his music never feels stolid in continuity or uniform in its content. A pity, perhaps, that the solo baritone and girls’ choir could not have appeared more extensively, but this is itself offset by the resourceful use of the orchestra to reinforce and open-out that expressive directness as is the work’s determining trait. Equally of note is the relative length and emotional density of those eight constituent sections which, while they unfold separately, merge into a cohesive and cumulative whole that the composer himself felt he had seldom matched. Six decades on and its qualities can hardly be gainsaid.

Also included here is An English Ballad, written for youthful forces but in no sense an ‘easy ride’ in terms of its technical requirements. There is no vocal element, but the lines inscribed on the title-page actually are ‘set’ by electric guitar; its signal contribution, along with that of vibraphone, indicative of Gardner’s penchant for jazz and willingness to embrace elements of the latter-day vernacular. Musically the piece proceeds as a free fantasia around and about the theme heard toward its midpoint, rounded off by a section whose High-Jinx proves infectious.

Indeed, given that Gardner was an instinctive composer for voices – eschewing the (wanton?) complexity of his relative contemporaries as well as that calculated simplicity all too evident in choral music of the present. Ashley Riches makes a forceful yet never unduly vehement contribution, while the City of London Choir and Paulina Voices respond enthusiastically to Hilary Davan Wetton, who steers ‘White Horse’ with audible conviction as to its cumulative structure and draws a feisty response from the BBC Concert Orchestra in An English Ballad.

Very much so. Often admired for his facility in writing carols and choral miniatures, Gardner was no less resourceful when working on a larger scale. Wide ranging sound and informative booklet notes (by the composer’s son Chris) round out what is an engaging and desirable disc.

You can discover more about this release at the EM Records website, where you can hear clips from the recording and also purchase.