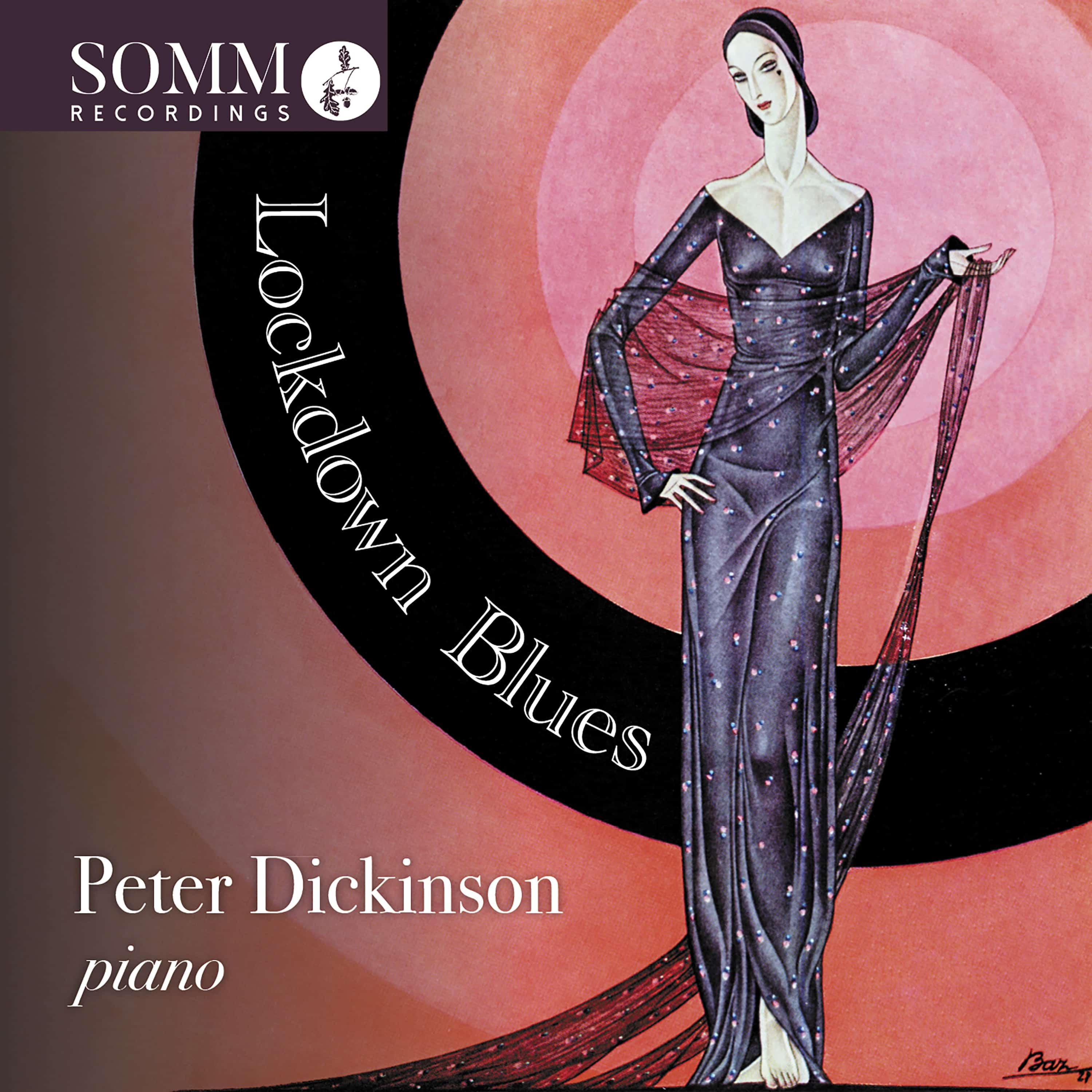 Peter Dickinson here turns the third phase of lockdown to his – and our – advantage with this collection of piano music touching on the blues and jazz which have long been a mainstay of his careers as performer and composer, and which also includes two notable first recordings.

The programme commences with the pensive sadness of Dickinson’s Freda’s Blues, written in memory of the widow of Lennox Berkeley, continuing with a poised and refreshingly non-mawkish take on MacDowell’s perennial To a Wild Rose – its blues and rag idioms made the basis of Dickinson’s Blue Rose. The empathetic feel of Lambert’s Elegiac Blues in memory of singer Florence Mills is affectingly caught, while Dickinson’s marrying of blues and Bach in Lockdown Blues recalls George Shearing’s pioneering such fusions. After the drollery of Poulenc’s Bal fantôme, Dickinson’s reworking of the Canzonetta which Barber intended for his unrealized Oboe Concerto proves a focal-point in its searching pathos. Such a quality is also to the fore in Berkeley’s limpid Andante, as is the alluring charm of Gershwin’s Three-Quarter Blues – and to which the whimsy of Poulenc’s Pastourelle provides a pertinent foil.

Whether as solo pianist or in recital with his sister Meriel, Dickinson has been unstinting in his advocacy of Satie and his reading of the original Gnossiennes (not those three published decades after the composer’s death) lacks for nothing in perception. Such is equally the case when, after the insinuating charm of Gershwin’s Who Cares? then the wistful eloquence of Goossens’s Lament for a Departed Doll, he renders Satie’s evergreen Gymnopédies with an objectivity that not unreasonably plays down the mystical aura often attributed to this music.

Perhaps the highlight here is Twelve Melodies that Dickinson has arranged from Ellington’s big-band numbers in what proved a veritable ‘golden age’ for such music and not previously recorded in this guise. Picking out a selection might hardly seem necessary, but the yearning of Solitude, eloquence of Lost in Meditation, questing emotions of Azure then the expressive warmth of Mood Indigo stand out in a sequence which concludes with the phlegmatic charm of Day-Dream then haunting atmosphere of Prelude to a Kiss. Moreover, Dickinson has one final trick up his sleeve with an elegant rendering of Cage’s In a Landscape – music in which this most recalcitrant of composers comes closest to his beloved Satie with its ineffable grace.

Very much so, thanks not merely to the range of music covered but also through Dickinson’s insight. Into his 87th year when these recordings were made, his technique remains as fluent as his understanding and enjoyment are audible. Long able to accommodate the populist and the experimental within his own music, such inclusiveness extends to the idiomatic aspect of his interpretation and the deftness of his touch. Surely nothing can now prevent the Ellington set being taken up by pianists everywhere, with the numerous shorter pieces ideal as encores.

Indeed. The piano sound has a naturalness and clarity ideal for this music, while few writers other than Dickinson would be equally aware of technical details and chart standings. Here is looking forward to further releases by this always resourceful pianist in his ‘Indian summer’.

You can discover more about this release and listen to clips at the SOMM Recordings website, where you can also purchase the recording. For more information on Peter Dickinson, click here.

After three wonderful albums extolling the virtues of French orchestral music, Korngold and Respighi, John Wilson and his Sinfonia of London charges turn much closer to home with a set of British music for strings drawn from the 1930s. They begin with an established classic, Britten’s Variations on a Theme of Frank Bridge, complemented by two neglected works from Sir Lennox Berkeley (his Serenade for Strings) and Sir Arthur Bliss (the Music for Strings), neither of which appears to have been recorded in the last 20 years. There is also room for the brief Lament from 1915 by Bridge himself.

Britten’s Variations on a Theme of Frank Bridge will be familiar to many, but rarely in a performance as good as this. The theme, lovingly drawn from the Second Idyll for string quartet of Britten’s teacher, receives a virtuoso treatment, taken through a number of wildly differing dance forms before a powerful fugue and finale. The variations are sharply contrasted, with a crisp March at odds with the loving Romance that follows; the fulsome Wiener Walzer countered by the rush of a Moto perpetuo.

Berkeley’s Serenade for Strings works really well in this company. It is a work beginning with outward optimism but which ultimately falling under the shadow of the imminent Second World War. A busy first movement, its Baroque influences brought out by Wilson, is complemented by an inward looking but tender Andantino. Berkeley finds renewed energy in a quickfire Scherzo, but that is trumped by the closing Lento, which leaves a lasting impression, reflecting the anxiety felt as the 1930s drew to a close.

There is a good deal of positive energy in Bliss’ Music for Strings. Taking a lead from Elgar’s Introduction and Allegro of 1905, the composer writes for a full string orchestra but often picks out a smaller group of soloists. The substantial three movements show a masterly command of the string orchestra, from the wide span of the vigorous first movement to the meaningful Romance that follows, with lovely rich contributions from violas and cellos. The third movement starts hesitantly, in the depths, but soon the light breaks through to an effervescent finale.

Everything works here, thanks to the thoroughly assertive performances secured by Wilson. He is quite quick on the draw with the theme for Britten’s variations, maybe quicker than some would like, but the thrills and spills that follow make this one of the finest versions available. The Aria Italiana has all guns blazing in a wonderful display of precision and power, while the Funeral March has a searing and chilling clarity.

Successful though the Britten is, it is the Berkeley and Bliss that ultimately give the disc its importance. The Berkeley is keenly felt, positive in its fast music but anxious in its two slower movements and raising emotional questions in the fourth. Wilson catches its air of uncertainty at the world in which we live, as relevant now as it was then.

The Bliss has terrific drive in its faster music, which builds up a thoroughly convincing momentum while succeeding in bringing forward the writing for the chamber ensemble at the front. The textures are beautifully clear thanks to the Chandos recording, the quicker melodies’ punchy phrasing cutting through easily.

The Bridge Lament, though short, proves a mellow complement to the Britten, a chance for the listener to collect their thoughts while the Sinfonia play with a beautiful, muted sound.

In every way. John Wilson and the Sinfonia of London breathe new life into this music, and their programme is superbly judged to bring two neglected and very fine works back into contention. The cover, a painting of Bliss’s Pen Pits house by Edward Wadsworth, is the icing on the cake with its classic 1930s style.

For further information on this release, visit the Chandos website.