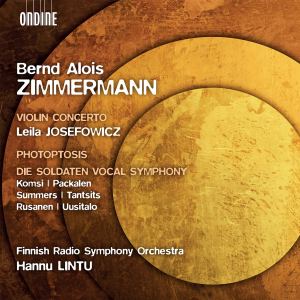 A belated though most welcome addition to those releases marking the centenary of the birth of Bernd Alois Zimmermann (1918-70), the Cologne-based composer whose singular music has gradually gained in recognition during the almost half-century since his untimely demise.

One of Zimmermann’s earliest successes, the Violin Concerto emerged out of a Violin Sonata from two years earlier. Most distinctive is the central Fantasia, whose rapt intensity (notably in its closing pages) is thrown into relief by the movements either side – a vehement opening Sonata with antecedents in Hindemith and Hartmann, then a final Rondo whose element of rumba duly adds to the heady abandon. Leila Josefowicz (who gave a memorable account of the Sonata at Wigmore Hall – reviewed by Arcana here) touches all the expressive bases for this impressive reading.

It was with his opera Die Soldaten that Zimmermann fully came into his own as a composer. Its gestation (1957-65) was a protracted one, during which the dramatic concept was radically overhauled without diluting the music’s emotive power. Intended to demonstrate the latter’s practicability (along the lines of Berg’s Lulu Symphony a quarter-century before), this Vocal Symphony comprises scenes from the first two of four acts in which the ultimately tragic fate of merchant’s daughter Marie at the hands of a brutal military class is set in motion.

Among the six soloists, Anu Komsi and Hilary Summers stand out for their security in the acrobatic vocal lines, while without eschewing more tangibly human expression. Yet it is in the purely orchestral episodes where Zimmermann’s increasing radicalism comes fully into focus – the Preludio with its melange of competing textures over the remorseless tread of drums; then the Intermezzo during Act Two – the simultaneity of action onstage mirrored by a layering of musical events with Zimmermann’s trait of timbral contrast rendered at its most visceral.

By the time of the ‘prelude for large orchestra’ that is Photoptosis, the composer’s idiom had found even greater power and concentration – evident in the textural stratification of its outer sections as they build from fugitive unease to assaultive violence. Between them, an interlude of half-remembered quotations and allusions ranges from the provocative to the inane – as if to confirm that remorseless ‘closing-in’ of the musical past on that of the present, and thereby denying any purpose for a creative future such as overcame Zimmermann in his final years.

Yes, and not least when the performances are as perceptive as they are here. Both the Violin Concerto and Photoptosis have been recorded several times, not least by Thomas Zehetmair (ECM) and Karl-Heinz Steffens (Capriccio), though these new accounts would now be first choices. The Soldaten-Symphony has had no previous commercial recording (live readings by Hiroshi Wakasugi in 1978 and Peter Hirsch in 2014 can be heard on YouTube), making this an essential addition to the Zimmermann discography aside from its artistic excellence.

Indeed. Hannu Lintu draws a committed response from his Finnish Radio Symphony players, recorded with unstinting clarity and the programme afforded context by a thoughtful booklet note from Mark Berry. An impressive release with which to mark Zimmermann’s centenary.

You can read more about this release on the Ondine website