First Hand Records comes up with another ‘first’ in this recording of the score for the film The Thief of Bagdad starring Douglas Fairbanks – one that set new standards for the ‘epic’   during the silent era, and which originally featured music to match from Mortimer Wilson.

Having starred in several major films (The Mark of Zorro, The Three Musketeers and Robin Hood), Fairbanks Sr determined to take matters to another level with The Thief of Baghdad – not least making its score an integral component. For this he turned to Wilson (1876-1932) – who had studied in Leipzig with Reger and later directed the Atlanta Symphony Orchestra, writing numerous compositions and several pedagogical books – encouraging him to create music whose symphonic aspect and panoramic expression were in themselves innovative.

Not all those involved in the project shared Fairbanks’s enthusiasm – among them impresario Morris Gest, who conspired to replace Wilson’s score with one from a higher-profile figure. James C. Bradford’s hurriedly assembled concoction almost immediately fell by the wayside, allowing the film’s highly successful first run to continue with Wilson’s music firmly in situ. Understandable, perhaps, why it had garnered praise but also attracted reservations given an emotional intensity and technical intricacy in advance of those previously attempted within a cinematic context. That said, Wilson was keen to make realization as practicable as possible – using relatively modest forces to facilitate performances in out-of-town venues, limiting the number of tempo or expression markings and even printing its parts in an easy-to-use format.

Nine decades on, its restoration was inevitably a challenge such as Mark Fitz-Gerald, having done comparable work on Shostakovich’s similarly ground-breaking scores for New Babylon (Naxos 8.572824-25) and Alone (Naxos 8.570316), was well equipped to undertake. How the music was initially reassembled and then adjusted to ensure its absolute synchronization with the film is explained in the accompanying booklet, a process which took several months prior to the first present-day showing at the Pordenone Silent Film Festival in October 2016, with the French premiere at Lyon this March. DVD presentation will hopefully be possible in due course; for now, the opportunity to hear Wilson’s superbly crafted score in so sympathetic a performance can only be welcomed by admirers of silent films and early 20th century music.

Nearly always. Wilson’s music is firmly within the late-Romantic vein of Glière or Respighi, though a pertinent comparison might be Ernesto Halffter’s score for the silent film Carmen released just two years later and on which Fitz-Gerald undertook a similar act of restoration (Naxos 5.572260). In both cases, the music’s panoramic sweep is reinforced by interplay of themes and motifs which sustains dramatic tension across the whole. Moreover, the exclusion of repeated sections makes for a ‘screen symphony’ which fits comfortably onto a single disc.

Indeed. The Frankfurt Radio Symphony Orchestra responds ably to Fitz-Gerald’s astute direction, and the sound has clarity as well as presence. The booklet, featuring extensive commentaries by Fitz-Gerald and Patrick Stanbury, sets the seal on this ambitious and worthwhile enterprise.

To listen to excerpts from this disc and view purchase options, visit the First Hand Records website. To read more about Mortimer WIlson, this interesting article from the New York Times gives more information, while for more on Douglas Fairbanks click here To read more about the performers, click on the names of Mark Fitz-Gerald and Frankfurt Radio Symphony Orchestra. 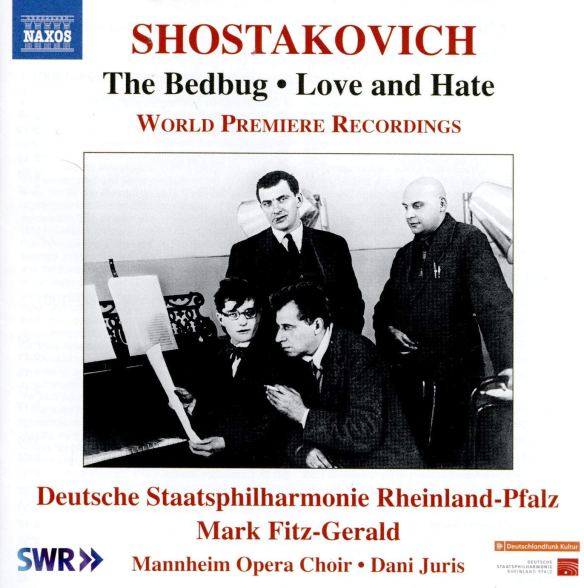 Naxos continues its ground-breaking traversal of the film and theatre music by Shostakovich with this coupling of scores long unheard as originally conceived, thanks in part to the work of Mark Fitz-Gerald in having reconstructed these from extant sketches and soundtracks.

Shostakovich’s earliest theatre score was for The Bedbug, a scatological comedy by the ill-fated Vladimir Mayakovsky whose two parts were set in the then-present and 50 years later in 1979. The main items include several astringent dance numbers audibly akin to Stravinsky and Weill, while others were recycled for later dramatic projects (most notably the Wedding Scene [track 6] which soon became the Overture to Erwin Dressel’s opera Armer Columbus), with resourceful usage of such instruments as saxophone, mandolin and musical-saw. An air of sardonic detachment pervades this music which doubtless contributed to the production’s brief theatrical run and its subsequent oblivion, but the confidence and panache with which Shostakovich acquits himself can hardly be gainsaid. Although the parodying of such Soviet archetypes as firemen and pioneers soon became taboo in a Soviet Union beholden to Stalin, the experience gained served the composer well in subsequent ballets and revues, so making the present score a significant harbinger for what was to follow over the ensuing five years.

That said, it is the score for Love and Hate that leaves the stronger impression here. Directed by Albert Gendelshtein, this one of several films resulting from Soviet-German cooperation in the interwar period and which ceased in 1937 when the gulf between Stalin’s and Hitler’s ‘socialism’ became unbridgeable. In its quirkily compelling amalgam of post-expressionist and socio-realist elements, this film is more than mere historical curio – as Shostakovich’s music makes plain in an expressive directness evident from the outset. Most notable in this respect is the song How Long Will My Heart Ache and Moan?, initially allotted to mezzo and female chorus [track 19], and a series of searchingly descriptive pieces as culminates in the surging intensity of The Funeral [track 33]. It is at such junctures that the more elegiac aspect of the Fifth Symphony (two years hence) comes into focus, making one regret that no suite was previously compiled. Maybe this will now prove possible given the score’s timely availability, so enabling a vital link in its composer’s evolution to be properly appreciated.

Yes, not least owing to the insight of Fitz-Gerald’s realizations with regard to those missing or fragmentary sections – where he captures the Shostakovich spirit in full measure – as also to the commitment of the Deutsche Staatsphilharmonie Rheinland-Pfalz in realizing the often wilful while always arresting nature of the composer’s inspirations. Forward but not unduly immediate sound, with extensive annotations by Fitz-Gerald, musicologist Gerard McBurney and Soviet cinema authority John Leman Riley, further enhance the attractions of this release.

Indeed, and it is to be hoped Fitz-Gerald will be continuing his exploration of this one facet of Shostakovich’s output as is still inadequately covered in terms of publication or recording. Several of the composer film and theatre scores from the 1930s still await such rehabilitation.

For more information on this release and to purchase in multiple formats visit the Naxos website, with an article on the recording here 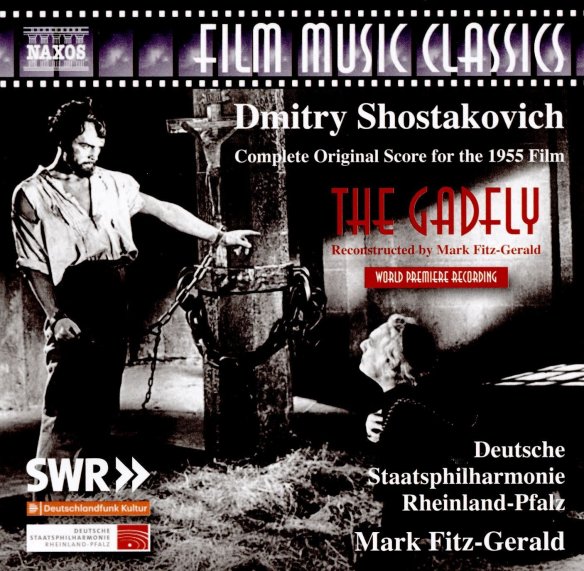 Mark Fitz-Gerald continues his pioneering series of Shostakovich film scores in their original orchestration with this disc of the composer’s music for The Gadfly, coupled with pieces that never made it to the final cut and excerpts from the most successful of his earlier film-scores.

Unlike that on the previous discs in this Naxos series (scores to New Babylon on 8.572824/5, Alone on 8.573747 and Girlfriends on 8.572138), the music for The Gadfly was very much a mainstream project for a composer struggling to find focus in the post-Stalin era. Alexander Faintzimmer’s adaptation of Ethel Voynich’s novel, essentially a romantic politicization of the Risorgimento among the mid-19th century Italian states, was a success with both Soviet officialdom and the public; while the 12-movemnet suite, as adapted by Lev Atovmian, has long been the most widely heard of Shostakovich’s film-derived scores. The present ‘urtext’ version was prepared and edited by Fitz-Gerald in conjunction with DSCH publishing house in Moscow and Paris (and has been published as Volume 138 of the New Complete Edition).

Despite its 29 individual cues averaging under two minutes, this sequence is (surprisingly?) cohesive in formal and expressive follow-through. Framed by the surging ‘Overture’ (track 1) and rhetorical ‘Finale (29), it follows the scenario closely. The famous ‘Romance’ is divided between the tracks ‘Youth’ and its reprise (4/25), with eloquent violin playing from Nikolaus Boewer, and its middle section is located elsewhere. Further highlights include the evocative ‘Dona nobis pacem’ (15) derived from Bach’s Mass in B minor, the infectious ‘Contredanse’ and ‘Galop’ for strings (19/20), and effervescent ‘Bazar’ (22) which became the well-known ‘Public Holiday’. Many of the other tracks are predominantly sombre or introspective, though the understated effectiveness of Shostakovich’s instrumentation offsets any risk of uniformity.

Also included are two organ cues excluded from the final score – including ‘Ave Maria’ (31), an ingenious reworking of a parody mass by Renaissance composer Antoine de Févin as was replaced by the Bach. The disc is completed by three excerpts from The Counterplan – made to commemorate the 15th anniversary of the Bolshevik Revolution, whose intermingling of personal relationships with construction in Leningrad is best remembered for its ‘Song of the Counterplan’. This emerges towards the close (34) to round-off these excerpts in fine style.

Indeed. Fitz-Gerald secures a lively response from his Deutsche Staatsphilharmonie forces, with the various guitar and mandolin solos idiomatically taken, while Elke Voelker’s organ contributions are recorded with necessary ambient space. Those who know The Gadfly from the suite will find these frequently stripped-down orchestrations of the original film-score an unexpected pleasure. The sound is unexceptionally fine (volume levels in louder items can sound a touch manipulated), while John Riley’s booklet notes are detailed and informative.

Yes. This is a welcome act of restoration for film-music almost entirely known in a version approved though not undertaken by the composer. Hopefully this series will be continued – a recording of the complete score for The Counterplan would be a worthwhile next instalment.

You can read more about this release on the Naxos website, while for more on Mark Fitz-Gerald, visit his